It was my hubby's 28th Birthday yesterday; and as per our traditions he got to choose what he wanted to eat for his birthday. He always has a full on fry up for breakfast on his birthday, and usually chooses homemade chicken kievs, chips and beans for his 'return to his childhood' birthday meal (plus he just loves my homemade kievs!). This year however, he opted for something different. He decided he would like to try a themed meal - after watching The Hairy Biker's Mississippi Adventure on Good Food Channel, he selected his favourite courses from the series and asked me to recreate! 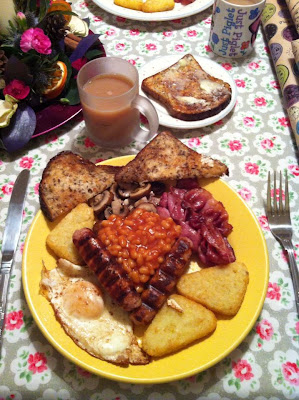 Note the unintentional 'heart' of sausages & beans :-) I'm so romantic without realising it!

Being off work at the moment meant I could take the cooking really slowly and go at my own pace, preparing things like the base of the mud pie in the morning, making the dips, rubs and sauces intermittently, and then resting in-between spurts in the kitchen. There was a fair bit to the menu - lots of chopping, sauce making, some baking, whipping, deboning chicken etc so it was a good job I had time on my side.

CHICKEN WINGS: I think I was most impressed with the chicken wings recipe, the spice rub, BBQ basting sauce, and dipping sauce were all so easy to put together and just created the scrummiest flavour! It is totally worth making the rubs etc from scratch as the levels of flavour you get are beyond any supermarket-bought pre-prepared ready-to-bake chicken wings I have ever tasted. I also think I definitely enjoy food far more when I know EXACTLY what has gone into it (and I'm not faced with E numbers, flavourings, and preservatives on the ingredients list).

I must say I tweaked the recipe slightly when it came to the dipping sauce - Firstly, I followed the recipe exactly and used 100g of sour cream, 2 tbsp mayo and 75g stilton but upon tasting it I felt it far too sour (the stilton was SO strong). Hubby and I prefer a hint of blue cheese rather than a very intense hit of it, and I felt that the stilton at that potency would overpower the spice rub and basting sauce on the chicken. So, to solve the problem I simply 'watered down' the intense stilton with more sour cream. Once blitzed it tasted absolutely INSANE ;-) and would be really versatile - going beautifully with chicken, mushrooms or pasta. 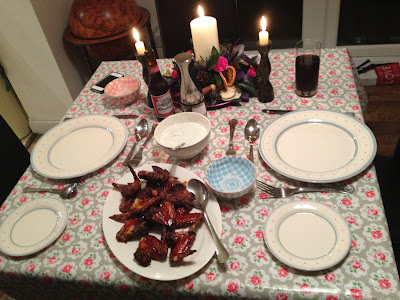 The Starter: Creole Spiced chicken wings in BBQ basting sauce, with a Stilton and sour cream dipping sauce. (Table complete with finger bowls as this is a messy starter!)

JAMBALAYA: This is a rice, chicken and prawn dish, with creole spices, chorizo sausage and lots of vegetables, cooked together to make an almost risotto-type dish full of flavour! I have made Jambalaya many times before from a recipe that my mum taught me as a child after she visited New Orleans on holiday. We always really enjoy it, but I hadn't made it for a long time, and decided I'd have a go at following Si & Dave's recipe to see how it differs.

In fact the recipe was very similar to my usual one, and really some of the only differences was using lots of celery (which I hate, but actually added a lovely savoury flavour to the rice), using deboned chicken thighs rather than chicken breast (which was far more succulent and I would definitely use the thighs again!) and actually putting the prawns in (I used to leave them out as I don't enjoy seafood). This time I used big juicy king prawns and my hubby really enjoyed them. Unfortunately I still don't enjoy eating prawns, and don't 'get' the meat & fish combo, so I ate round them and gave all my prawns to the Mr (Happy Birthday!) It is all down to personal taste at the end of the day. 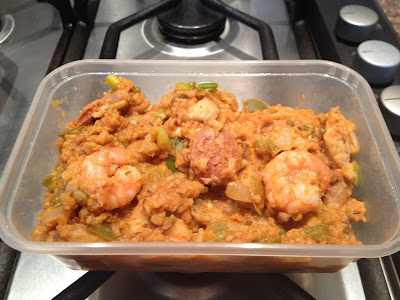 I didn't get a picture of the final dish in our big casserole pot as we were to busy eating/enjoying it. I made enough to serve 4 - hubby has taken a big pot for his lunch today, along with the left over stilton sauce in a pot with celery sticks to dip, and this is the 4th left over portion, which I snapped a quick photo of for you to see!

MISSISSIPPI MUD PIE: I was excited about trying this recipe as I had no idea what to expect having never made or eaten it before. It is not normally something that would appeal to me, or that I'd choose if I saw it on a menu. This is mainly because I always assumed it would be cheesecake-like due to the biscuit base, soft centre & cream. I am not a fan of cheesecake - I find it too rich, usually quite badly made and quite frankly pretty bland/boring. The only cheesecake I enjoy is Nigella's baked lime cheesecake with chocolate-chip cookie base (recipe here) which I've made a fair few times and is always a scrummy show stopper.

The Mississippi Mud Pie was a HUGE hit with both me and the hubby, and is a very moreish dessert. It uses chocolate digestives and oreo cookies all smooshed up for the base/pie crust, and this gives the dessert an intense saltiness which I LOVED. It took the edge off the sweetness, and meant that although decadent and rich it wasn't 'too much'. I was unsure what the filling of the pie would be like as although like a cheesecake it didn't use cream cheese...what would a mixture of eggs, chocolate, butter, cocoa powder and double cream baked in the oven taste and look like? The answer: a soft fudge-like chocolate truffle YUM! Once out of the oven and cooled you cover the 'pie' with softly whipped double cream and lashings of grated dark chocolate et voila! 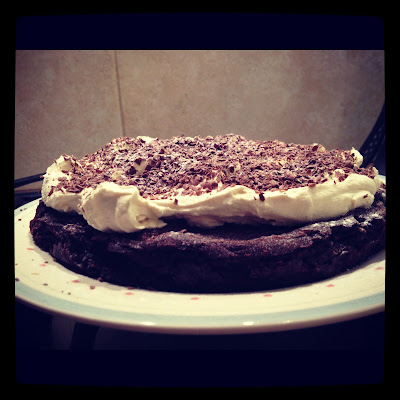 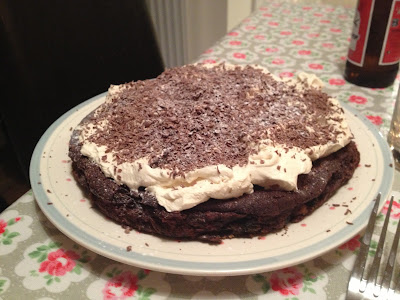 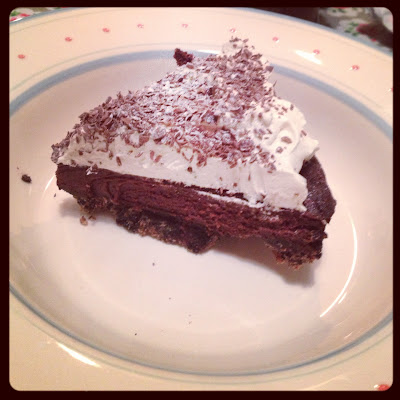 I must admit that my mud pie was not 'pie' like as I didn't push the biscuits up the sides of the tin to make a crust, I just made a base (like a cheesecake), this worked fine and it was still just as delicious I'm sure.

My scales broke as I started measuring out the biscuits and I had to 'guess' and just didn't quite make enough to push it up the sides. Next time I make it (there will definitely be a next time) I will make a pie crust with the biscuits as I think it would improve the over all appearance of the dish.

Later in the day, armed with some new scales I made the rest of the mud-pie and it was easy and problem-free!

A successful dinner all round - HAPPY BIRTHDAY HUBBY!

Go on, try it yourself...you know you want to!