Last weekend we headed to Birmingham Arena to see Disney on Ice - 100 Years of Magic, it was our third visit to a Disney on Ice show (Bert and I) but it was Liam and Connie's first experience. I was so excited to experience the show with them for the first time.

Beforehand, Connie was most excited about seeing her beloved Minnie Mouse, Anna from Frozen, Belle from Beauty and the Beast, and Rapunzel from Tangled - thankfully, they didn't disappoint and she got to experience all her favourite Disney characters live on the ice.


This fanfare production featured more than 50 unforgettable Disney stars in a celebration of 100 years of Walt Disney magic. 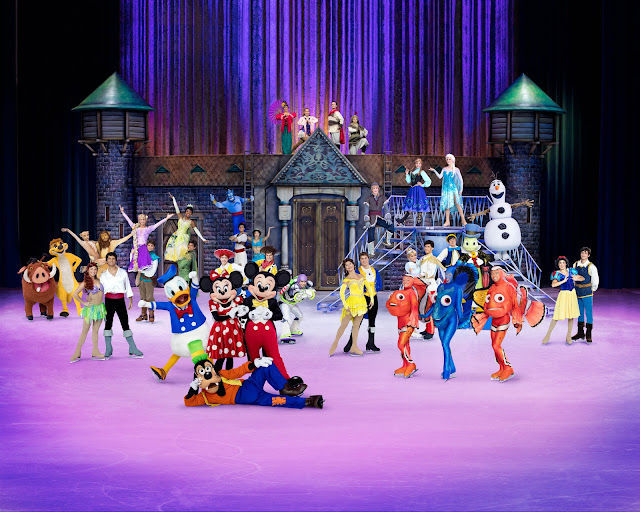 The show had us travel to the heart of Africa with Disney’s The Lion King, we were taken on an adventure in friendship with the gang from Disney Pixar’s Toy Story, and we watched in amazement as Belle broke the Beast’s curse in the tale of Beauty & The Beast. To Connie's delights we got to enter the magical kingdom of Arendelle from Disney’s Frozen and journey up the North Mountain with hilarious snowman Olaf and rugged mountain-man Kristoff, as they helped royal sisters Anna and Elsa discover that true love conquers all. 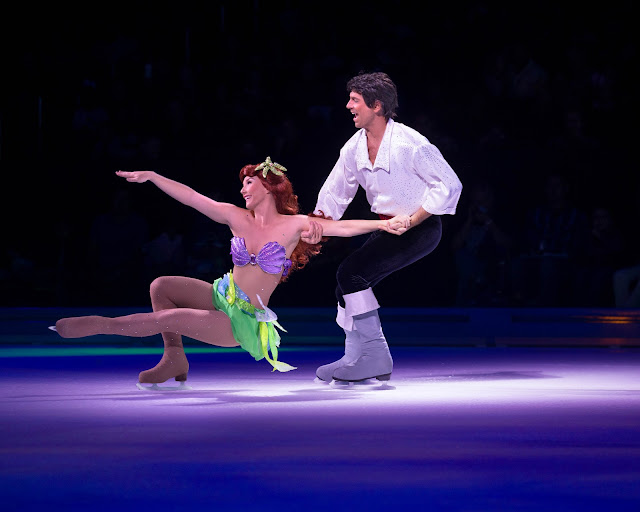 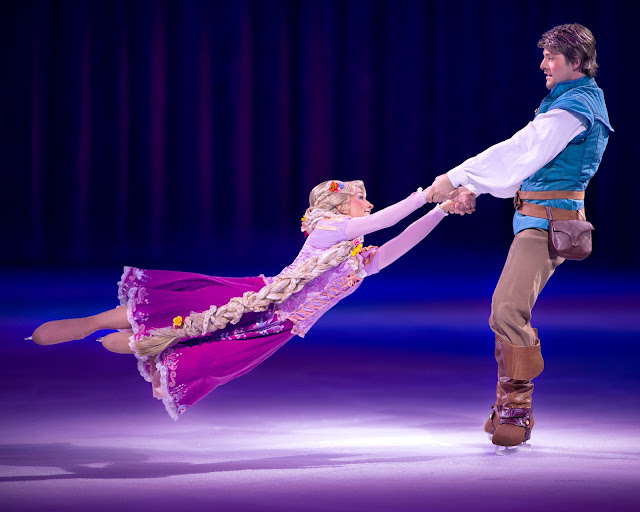 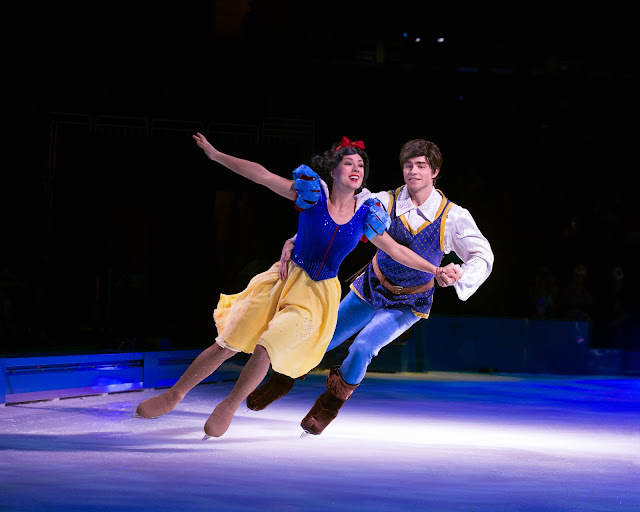 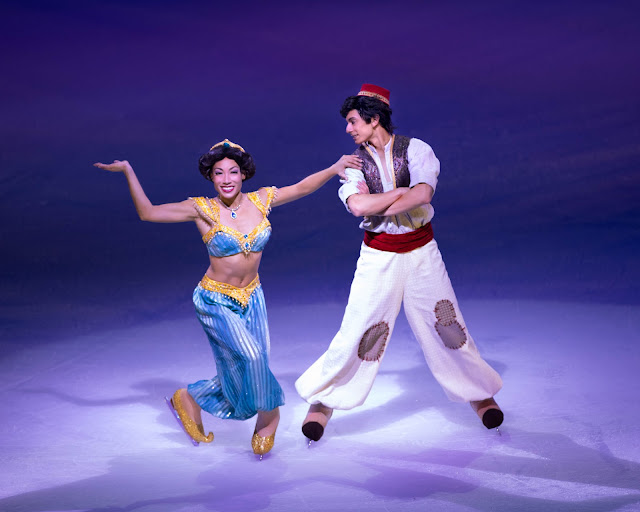 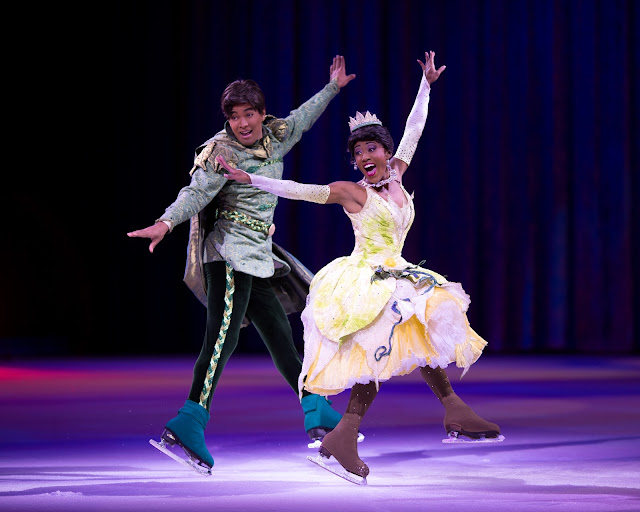 Out of all the Disney on Ice shows we've seen to date, this one incorporated a larger number of Disney classics/characters, the first part of the show focussing very much on all the famous Prince/Princess couples through the years - although this was very beautiful to watch, it was less of a visual spectacle than other Disney on Ice shows we've seen - there was a lot less set/large props etc - it was very much about the ice dancers (who are extraordinarily talented!) It could be because Connie is only 3, but towards the end of the first section her concentration was waning & she was becoming a little restless.

This picked up once we got into a larger-scale sequence of the Frozen story - and she had a lot more to look at - with amazing costumes, set, lighting and even pyrotechnics. This large-scale spectacle stuff is definitely what Disney on Ice do best! 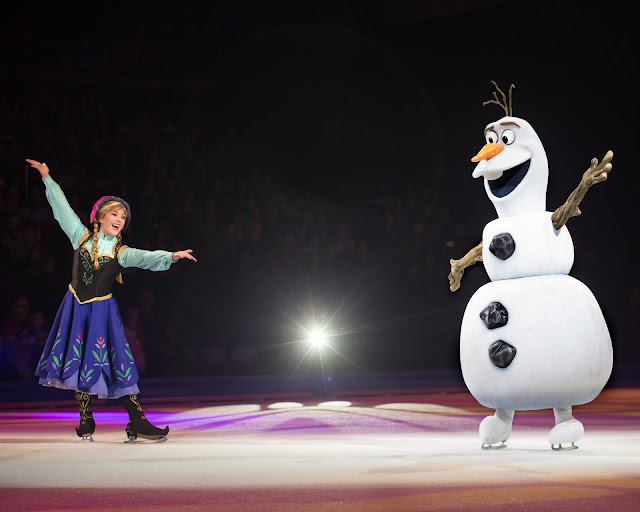 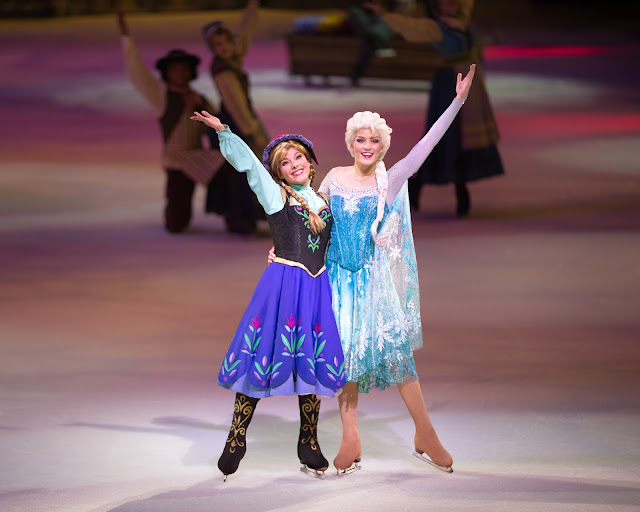 During the interval we refuelled and the kids chose a little toy each, I will say that as expected with big arena tours like this, the merchandise is expensive - so be prepared - if it's in your budget then great, but if not perhaps encouraging the kids to save some pocket money or birthday/xmas money to spend would be wise, or to bring along their own Disney toys (mine both bought their own Minnie Mouse and Pluto cuddly toys), but they had also been given £15 each from their Nanny to spend at the show, so Connie chose a small cuddly toy Minnie Mouse ("a baby Minnie!") and Bert chose a small Woody figure which were both priced at just under £15 - there wasn't really much at all for under £12 - and the big cuddly toys were around £22. My two were of course THRILLED with their new purchases and haven't put them down a week later! 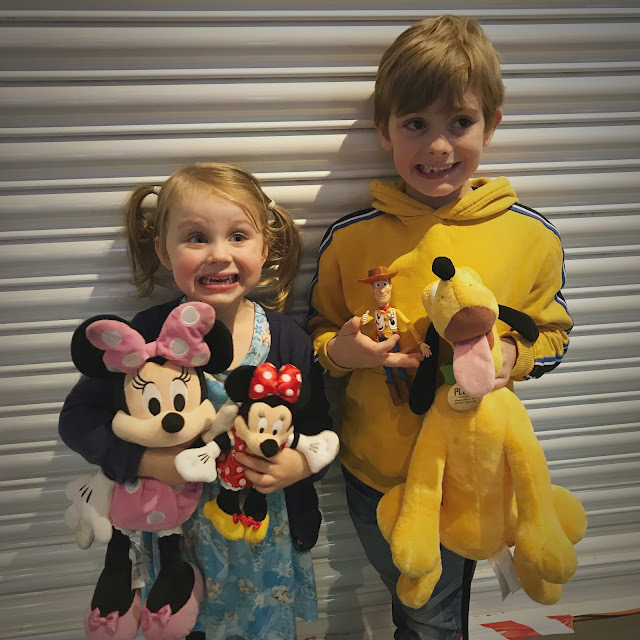 One thing I will say, is Bert and I have been lucky enough to be gifted tickets to see three consecutive Disney on Ice shows, and I think for Bert this time (without wanting him to come across as spoilt or conceited) the show's content was quite samey/similar to previous shows we've seen (in terms of which stories were told) but the style was different (not so much of the longer stories so much as a celebration of lots and lots of characters).

The last two Disney on Ice shows we saw were Disney on Ice: Dream Big in Nov 2018 and Disney on Ice: Worlds of Enchantment in April 2018, which definitely focussed more on telling the famous stories we know and love, rather than spanning as many characters as possible. Of course, there are only so many Disney characters in existence, so you have to expect a certain level of repetition at these style shows, but perhaps three shows in quick succession means he has been very spoilt!

He did struggle to focus - getting a bit twitchy throughout - he found the 'just dancing' (his words) sequences a bit long, and I think he was looking for the big-scale sets, pyrotechnics in abundance and some more of the longer story sequences which we've experienced at previous shows. He got a stern talking to afterwards about how lucky he is, and how some children never get to see a Disney on Ice show, and he's seen three!! But you know six year olds - they say exactly what they think, damn the consequences or how it might sound to others! 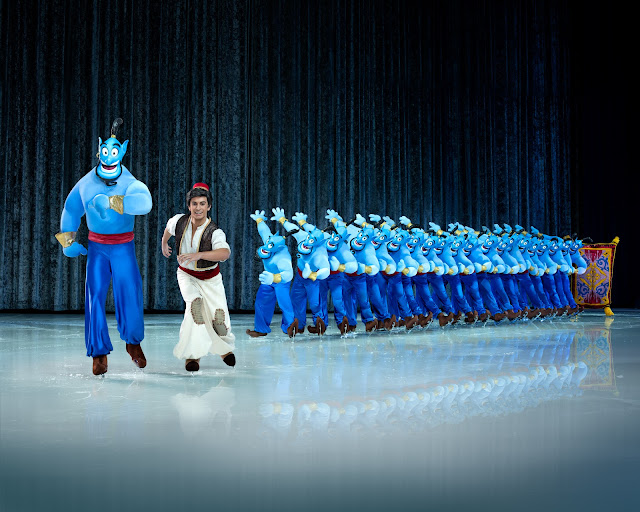 That being said, Bert's favourite part by far was the short Aladdin sequence (his favourite of the Disney classics) and he especially loved the appearance of all the genies!! What fun! 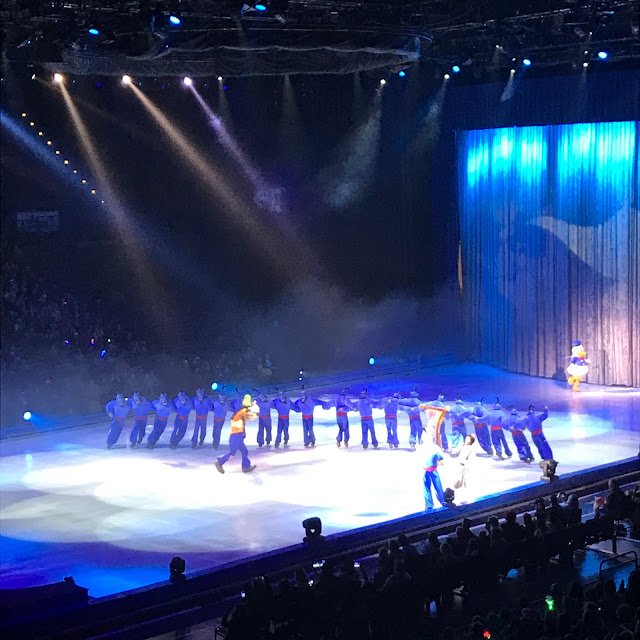 For me, the best part was watching Connie's reaction to seeing it all for the first time, I loved watching her wave away at Minnie Mouse and squeal with excitement when she realised Belle was on the ice - priceless moments indeed. She wore her Frozen dress and she was so excited to be wearing it to the special Disney show - bless her heart! 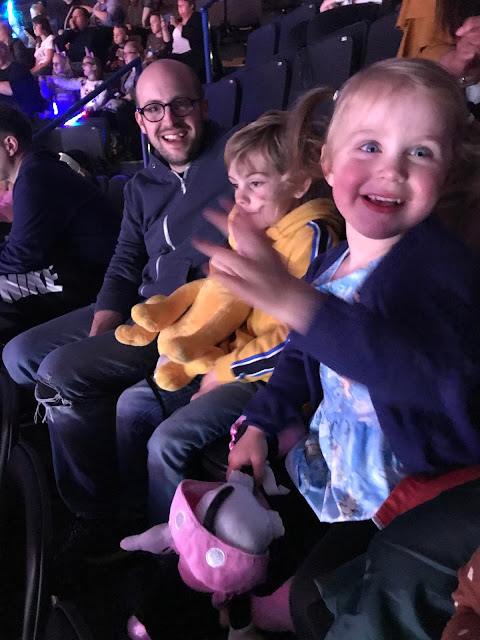 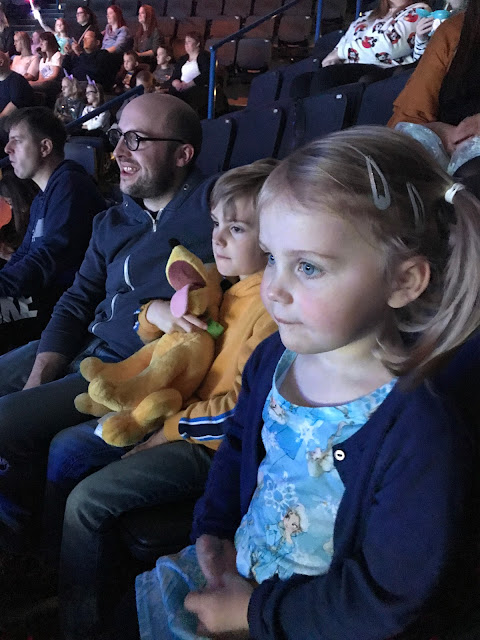 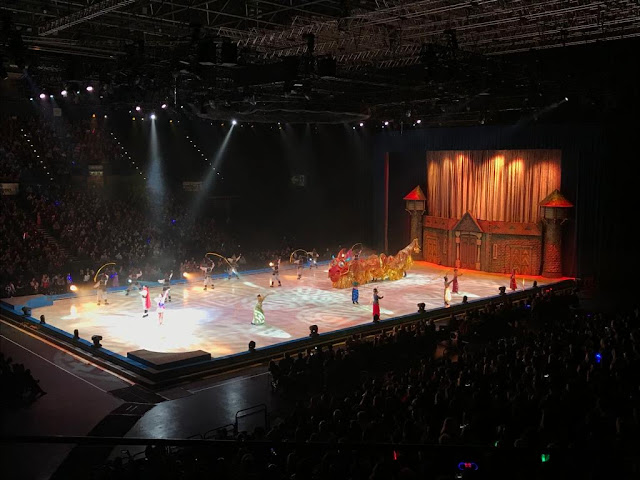 My favourite part of the show was the Mulan sequence - especially the giant Chinese dragon, it was amazing! I absolutely LOVE Mulan (I'm SO EXCITED for the live action version coming out soon!) and because it's not as popular a Disney film, you don't often see it included in shows like this, so I was thrilled to see it had a part to play in this version of the show. They sang 'Let's Get Down to Business' which is one of my favourite songs from Mulan, and I just thoroughly enjoyed the whole sequence - my only complaint was I wish they'd told more of the story and given more stage time to it. 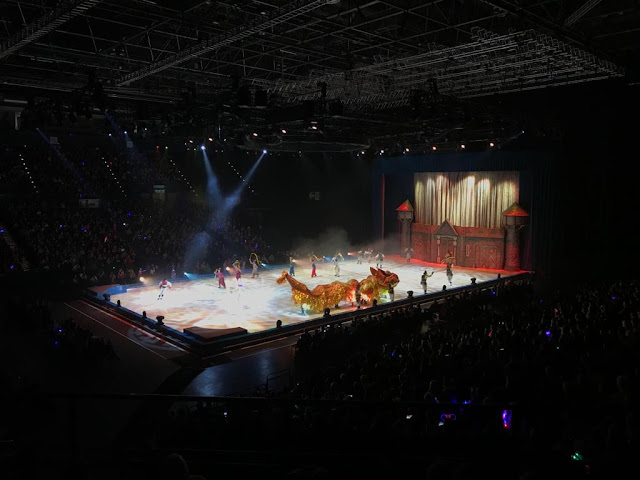 Despite the reservations about the content this time round, Disney on Ice in our opinion is still a very special experience, perfect for families who love all things Disney. The quality of the production as a whole is really brilliant - from the amazing ice dancers, to the costumes, the enchanting music we all know and love (and sing along to) the set design to the incredible lighting, it is a wonder to behold. There's just something about an arena full of happy Disney fans all enjoying the Disney magic across many generations that can't fail at putting a smile on your face.

We will most definitely be back!

Huge thanks to the Disney on Ice team for having us!

Book your tickets now to avoid disappointment at www.disneyonice.com

We were given complimentary tickets to Disney on Ice in return for this review post. All views are our own.