At 38 weeks + 4 days pregnant I think I've just completed my last bake-a-thon until after my Little Mr arrives. I don't think I have much stamina left for standing for long periods or working in a hot kitchen - mind you, if baby comes late I may well need to bake to keep me occupied and to stop me from pulling my hair out - we'll see.

This week I've been trying out my newest baking-gadget purchase, and I have to say after some trial and error I'm so pleased with the purchase, and the baking results.

I went to my first Pampered Chef party a few weeks ago, and decided to purchase a clever little baking kit which consists of a 24 hole mini muffin baking tray, and a little wooden dobber (tart shaper) which you use to press pastry into the tray - making mini pastry cases in an instant with very little work. This kit appealed as its so easy, child friendly and versatile - suitable for baking any number of sweet or savoury tarts, mini cheesecakes, quiches, cakes etc.

The muffin tray is priced at £20, and the dobber at £7.25 - not cheap, but the quality of the products have really impressed me, and I know its the sort of item I'll still be using in 10 years time. 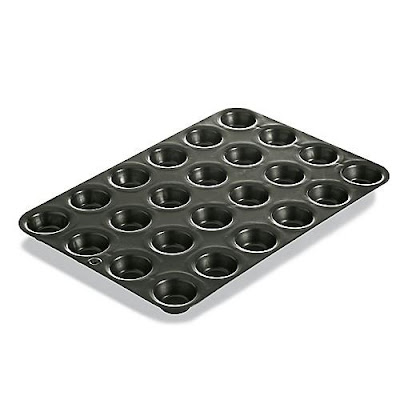 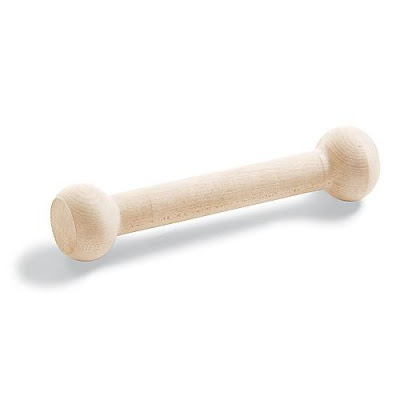 I had my lovely mum and aunt to stay at the beginning of the week, and wanted to make them a sweet treat which gave me the perfect excuse to try the mini muffin pan for the first time. I decided to make mini banoffe tarts.

This was the first recipe I tried in the mini muffin tin and I'd been advised loads of different ways and methods of making them. I used rolos and baked them as advised by one website, only to find they bubbled up out over the pastry and looked dreadful. :-( So in a rescue mission I scraped the rolo out of each one, leaving the cooked banana, and added toffee sauce & a chocolate button to each one instead - I much preferred this method. I also used a whole block (500g) of pastry as advised by a few different websites, and I found the tarts to be a touch too thick for my liking - so I would advise using just half a block of pastry instead. 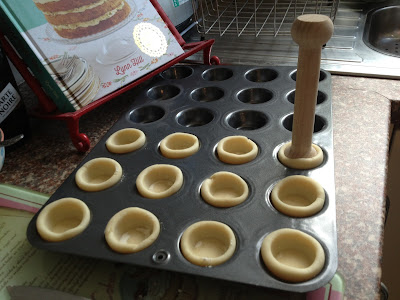 4. Place a slice of banana in the bottom of each one and bake for 15-20 mins in a medium oven until pastry is lightly golden and firm to touch. 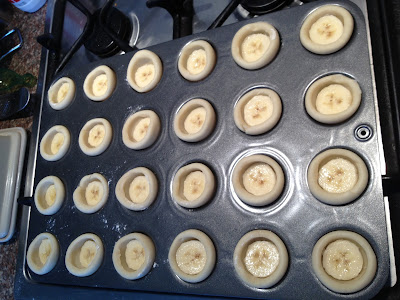 ready for the oven

5. While they are warm pour in toffee sauce and top with a chocolate button. Alternatively you could pop a rolo inside each one and the residual heat should melt the toffee/chocolate of the rolo.

6. Leave to cool. Whip the double cream and place into a piping bag.

7. Pipe the double cream onto the top and decorate with either more chocolate buttons or some grated chocolate. 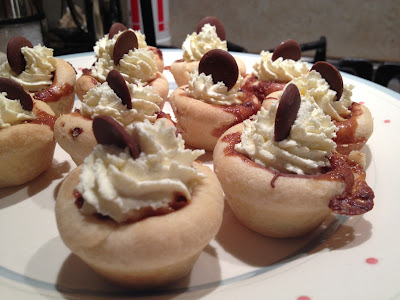 my final tarts: pastry too thick, and rolo 'splodges' down the side of the pastry :-( but lesson learned for next time.

The main thing is they tasted scrummy, and I've definitely learnt my lesson in terms of how to make the best version of these next time.

Mid-week this week we said farewell to my mum and auntie, and welcomed our friends Danni and Charlie over for a catch up, sleepover and day together today. Danni asked if we could do some baking  as her mums work have a charity bake sale on tomorrow to raise money for Noah's Ark Children's Hospice. Loving any excuse to bake, and always up for helping a deserving cause we set to work deciding what to bake.

After the trial and error of the banoffee tarts I wanted to try using my mini muffin tin again, and after some mooching around on the internet we came up with two yummies we wanted to try. 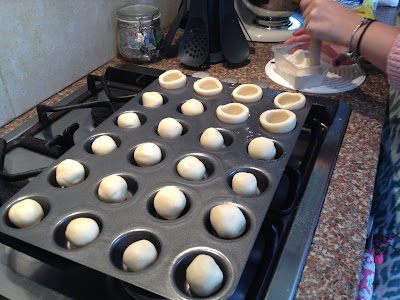 using the dobber to squash the pastry into cases

4. Use a small fork or cocktail stick to prick some holes in the bottom of each pastry case to stop them rising too much when baking. Bake in a medium oven for 15 -20 mins until lightly golden and firm to the touch. 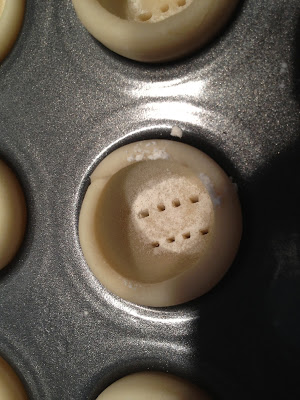 holes in the bottom of each one

5. While pastry cases are cooking combine the butter, icing sugar, peanut butter and milk in your food mixer until light and fluffy. Place into a piping bag with a large round nozzle. 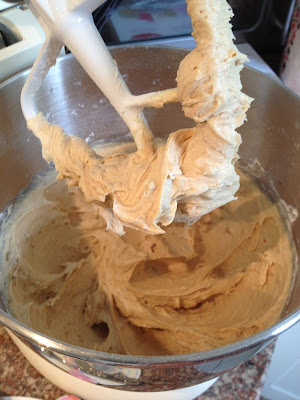 6. Leave cases to cool. Once cooled pipe in the peanut buttercream, and pop one of each chocolate button in the top butterfly style to decorate. 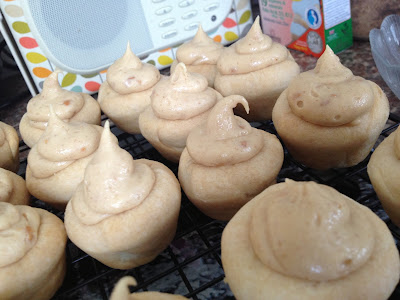 piped and ready to decorate 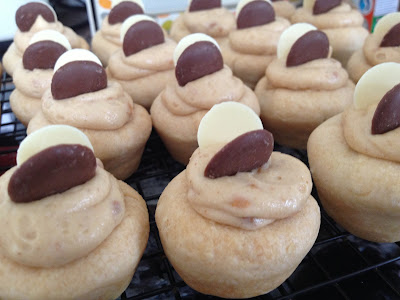 I found this recipe over on Tanida's 'Sweet Make Me Smile' blog... and I have to say it worked absolutely perfectly! The outcome of the warm, soft, sticky mini pecan and cinnamon bites were insanely tasty & very easy to make.

Tanida is American and therefore uses cup measurements in her recipe - I handily have some awesome little birdy 'cup' measuring jugs for when I'm using American recipes, but you can use an online converter to covert to grams if needed.