All Aboard the Hogwarts Express! 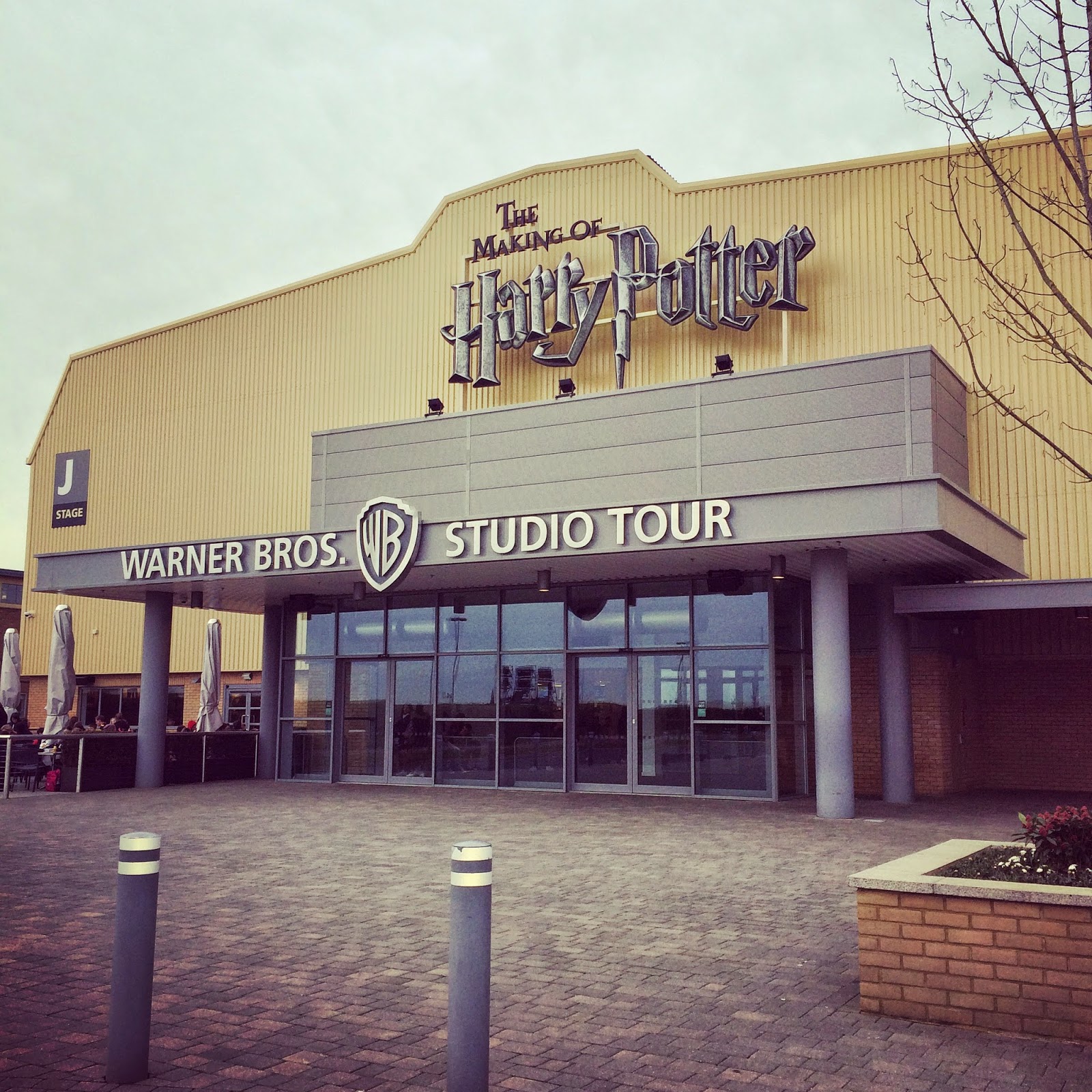 We have had some blooming exciting days in the Bishop household of late, more to come on some of our antics later, but first of all I wanted to share with you our amazing night at the Warner Bros Studio Tour: The Making of Harry Potter, last Thursday night.

We were lucky enough to be given a family press pass to the preview of the newest expansion of the Studio Tour, in Leavesden, Watford: the unveiling of The Hogwarts Express.

The studios in Leavesden is where all of the Harry Potter movies were filmed, and since they called "that's a wrap" on the last movie, Warner Bros have transformed the film studios into a giant homage to all things Harry Potter. From whole in-tact sets, to costumes, green screen experiences, props, and now Platform 9 ¾ in all its splendid glory; the studio tour will have even the mildest Harry Potter fan enthralled.

It was our first ever visit to the Harry Potter Experience, and Bert, Hubby and I were very excited! I have a strong link to the Harry Potter franchise, and I feel as if I truly grew up with Mr Potter: my auntie, Amanda Knight, was the Head of Make Up for all of the Harry Potter movies, and over the years our family have all had turns at being extras and working behind the scenes on the movies, and we've all been lucky enough to meet the cast on numerous occasions. I was an extra on the first Harry Potter film (Harry Potter and The Philosopher's Stone) and so I was really excited to go back in time, and immerse myself back into my childhood by stepping out onto Platform 9 ¾ once again.

Thursday nights press event saw us explore the whole of the studio tour - and wow there was just so much to see... 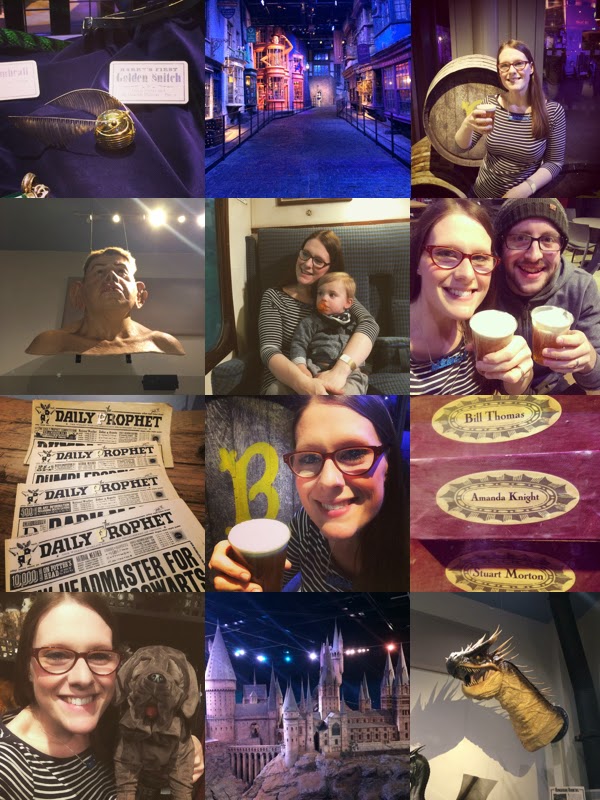 There's so much to see at the Making of Harry Potter Studio Tour.

From seeing the real Golden Snitch, the Goblet of Fire, huge set pieces, full scale models of Hogwarts, and real prints of The Daily Prophet newspaper, I genuinely didn't know where to look first!

We even got to try a Butterbeer, which I can report is the most delicious tasting soft drink you'll ever have the pleasure of drinking: it is sweet, buttery, and cream-soda like with a big thick creamy frothy top! Heaven in a glass no less. 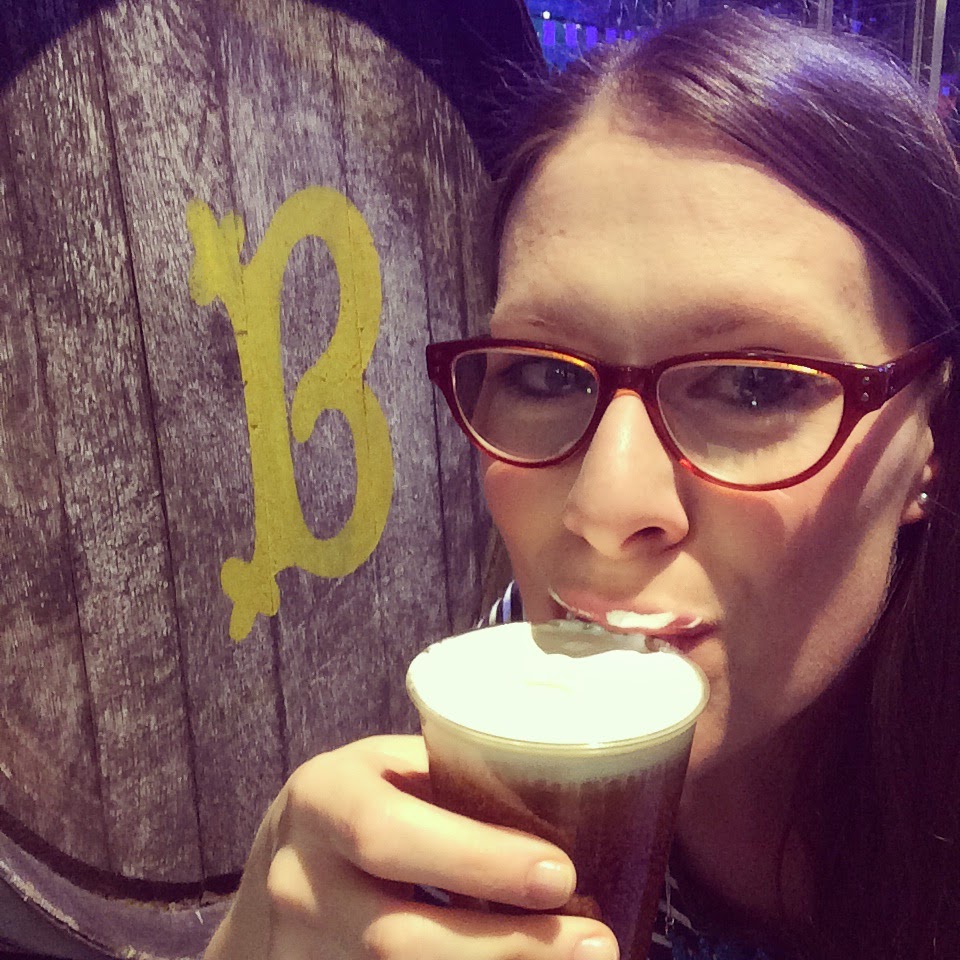 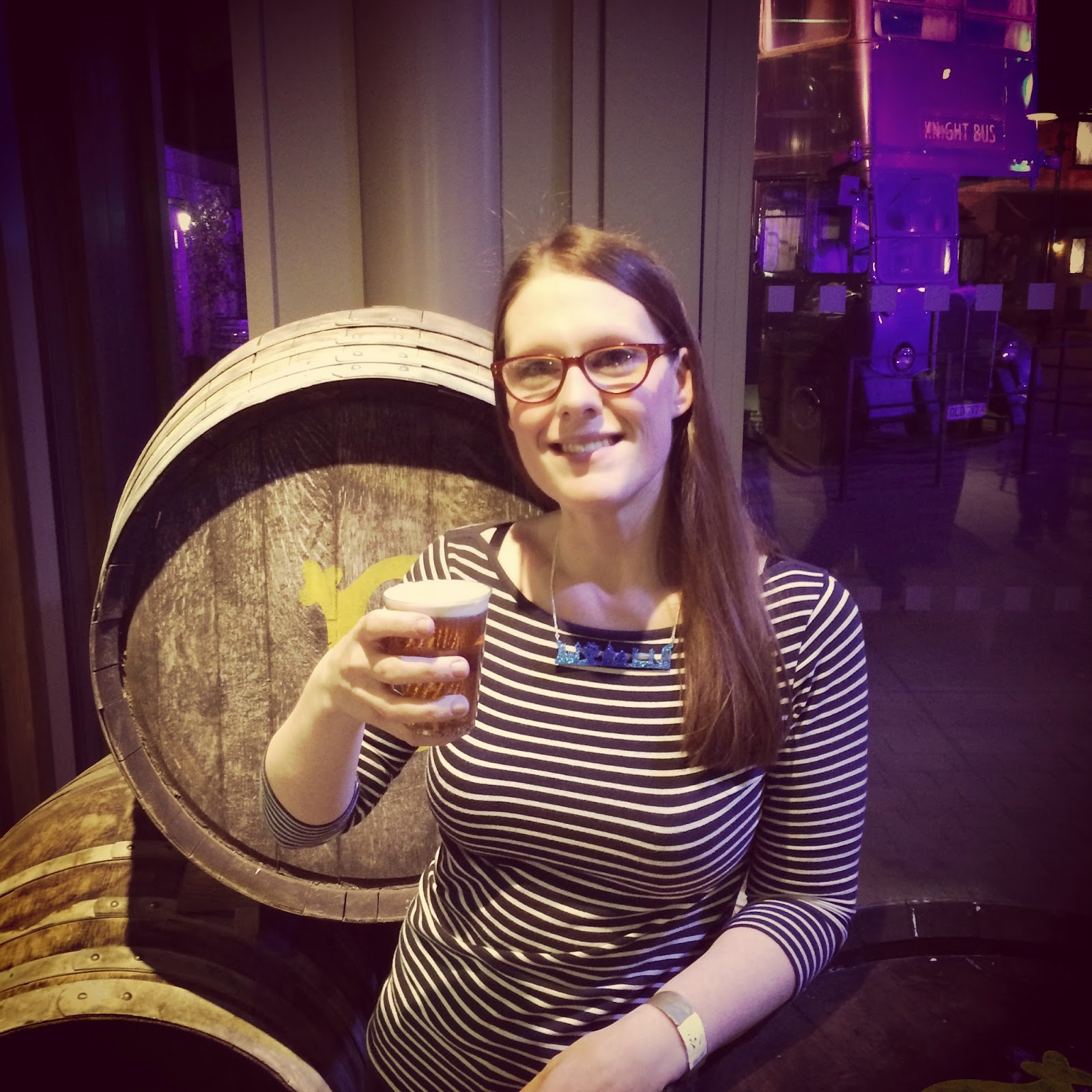 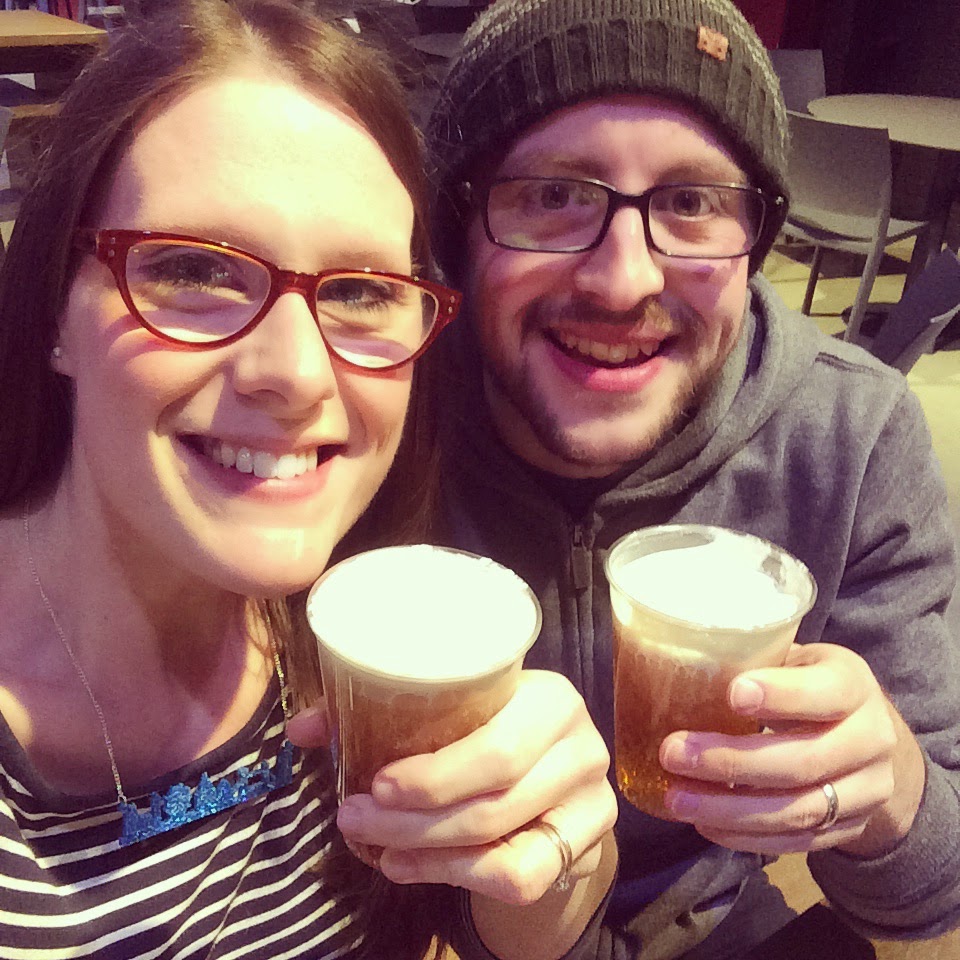 After exploring the majority of the studio tour, we flashed our golden wrist bands and were showed into the 'sneak preview' of the breathtaking Platform 9¾. 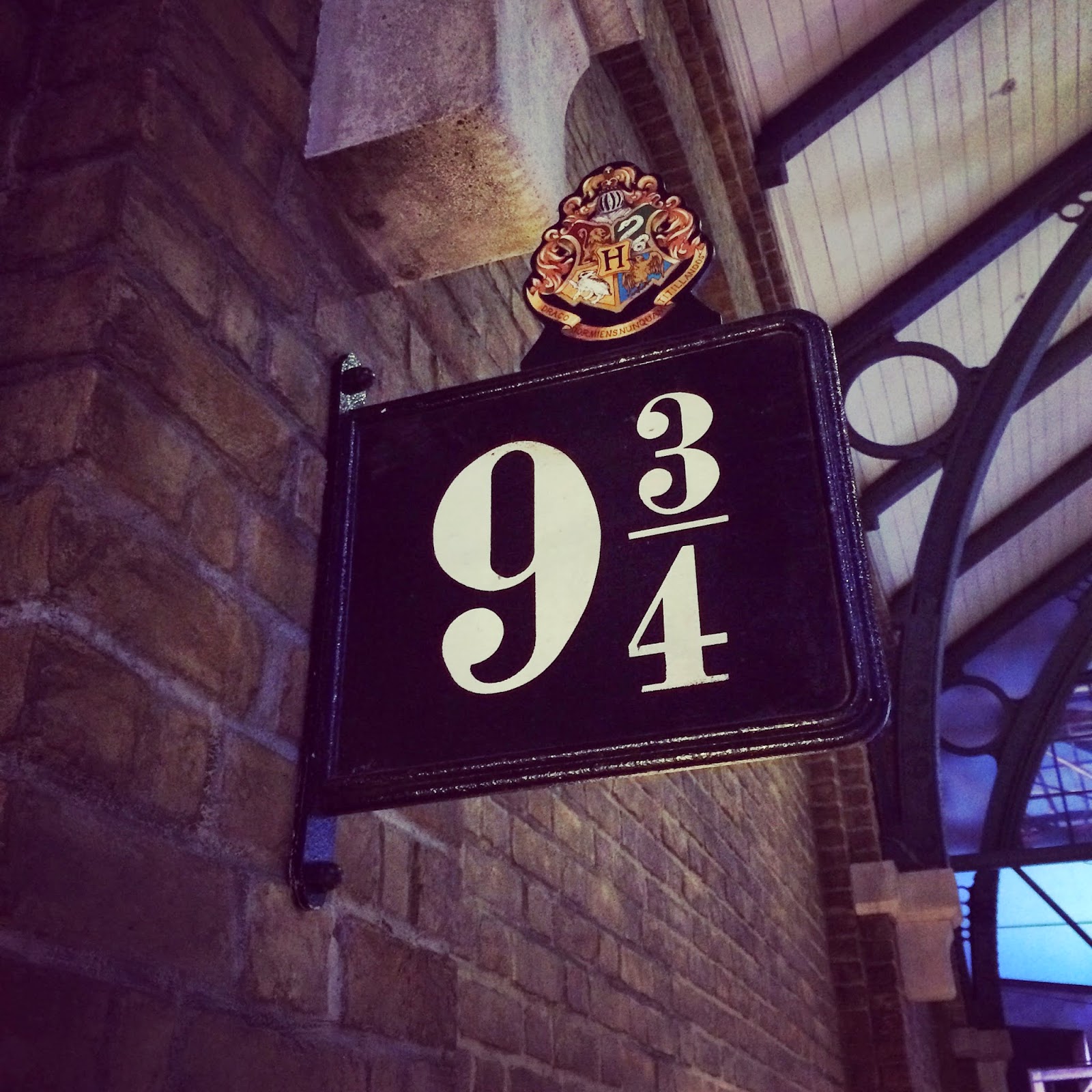 I felt so emotional stepping out on to Platform 9¾

As we turned the corner to enter the newest expansion in the studio tour we collectively gasped - seeing that beautiful train in all her glory was a truly magical moment... 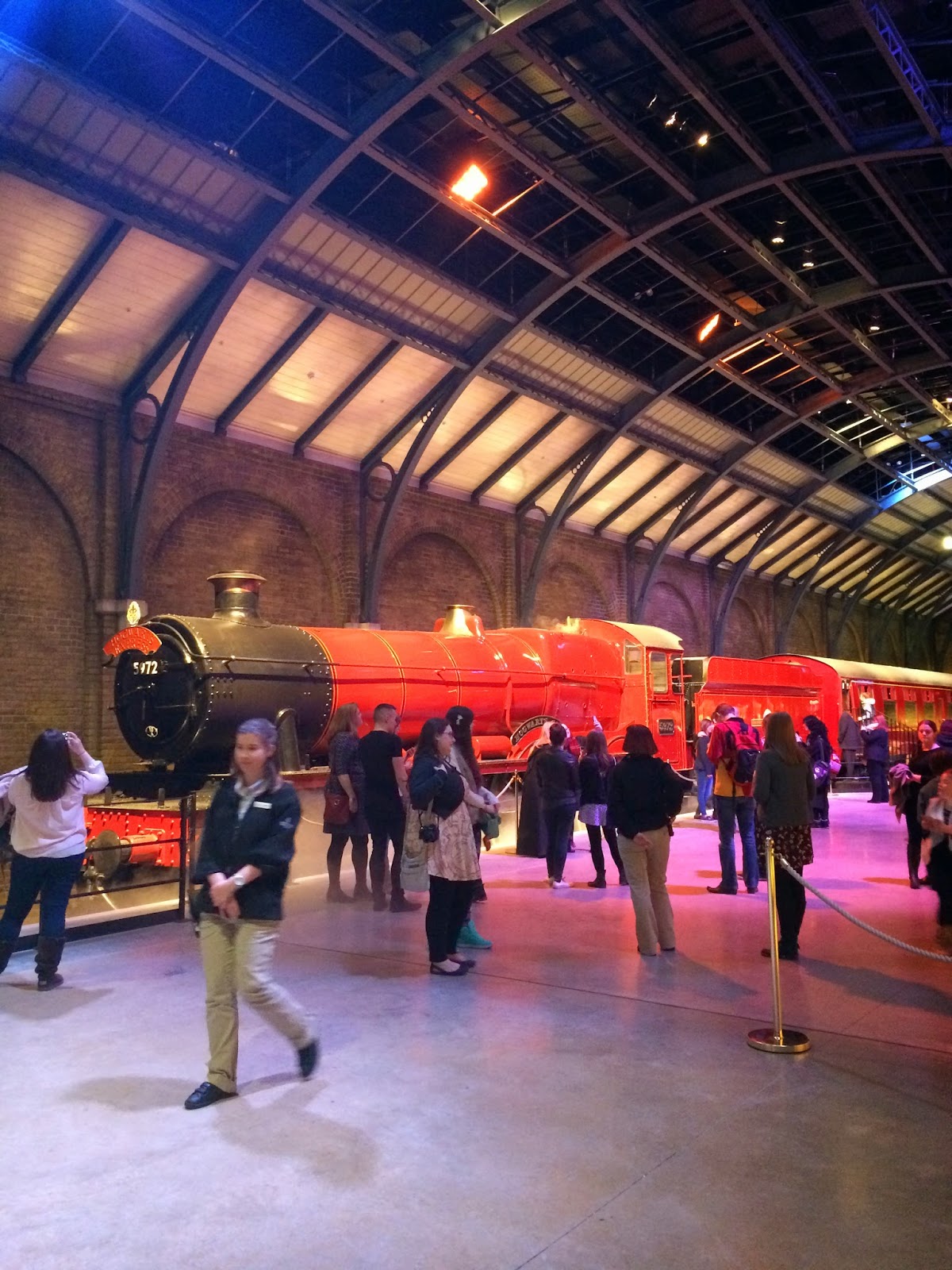 The hustle and bustle of Platform 9¾

The expansion is set up to look exactly like the platform at Kings Cross station, with the beautiful arched ceiling, and even a high definition image of London displayed and lit across the opening of the tunnel - it was just so realistic. 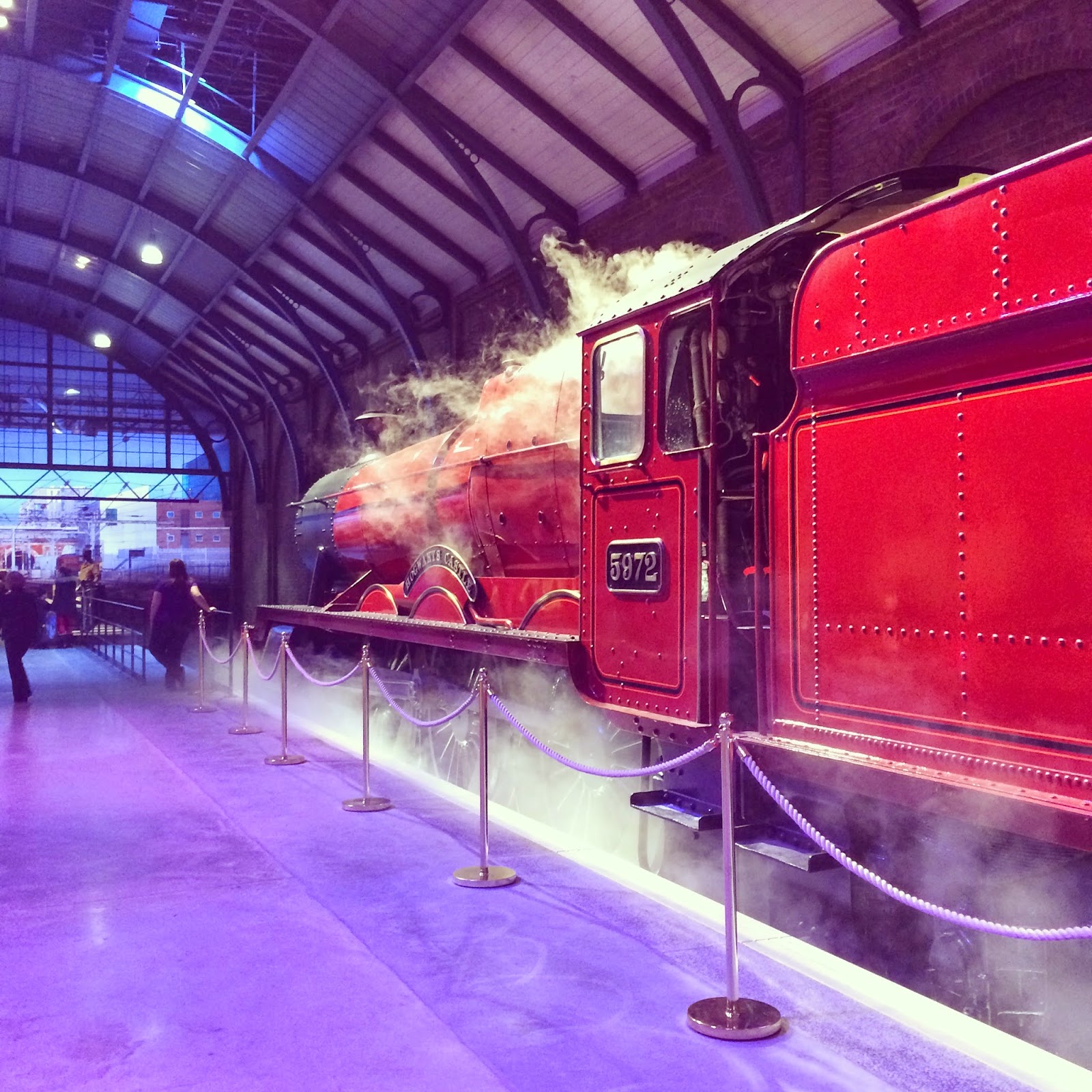 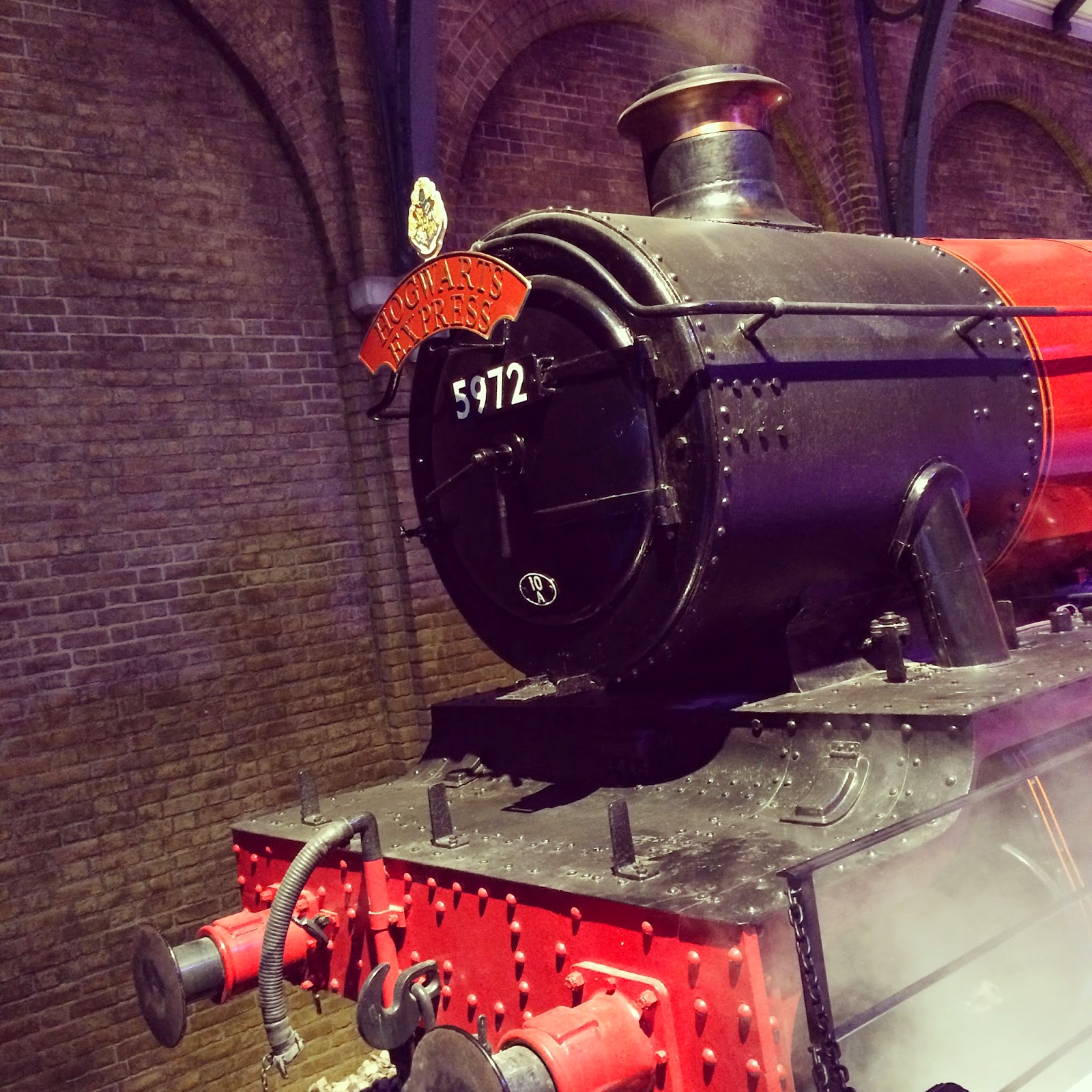 The Hogwarts Express in all her glory!

The train herself is absolutely stunning. I've always had a bit of a thing for a steam engine, which I think must stem back from visiting a local steam railway as a child (Bluebell Railway)...seeing such an iconic train steaming and chugging was pretty cool - especially when thinking back to those first scenes of Harry heading to Hogwarts for the first time!

We were lucky enough to climb aboard the train, and explore the carriages, each was set up to replicate exactly how it was dressed for each of the films - it bought back so many memories, and has made me want to re-read all of the books, and re-watch all of the films. 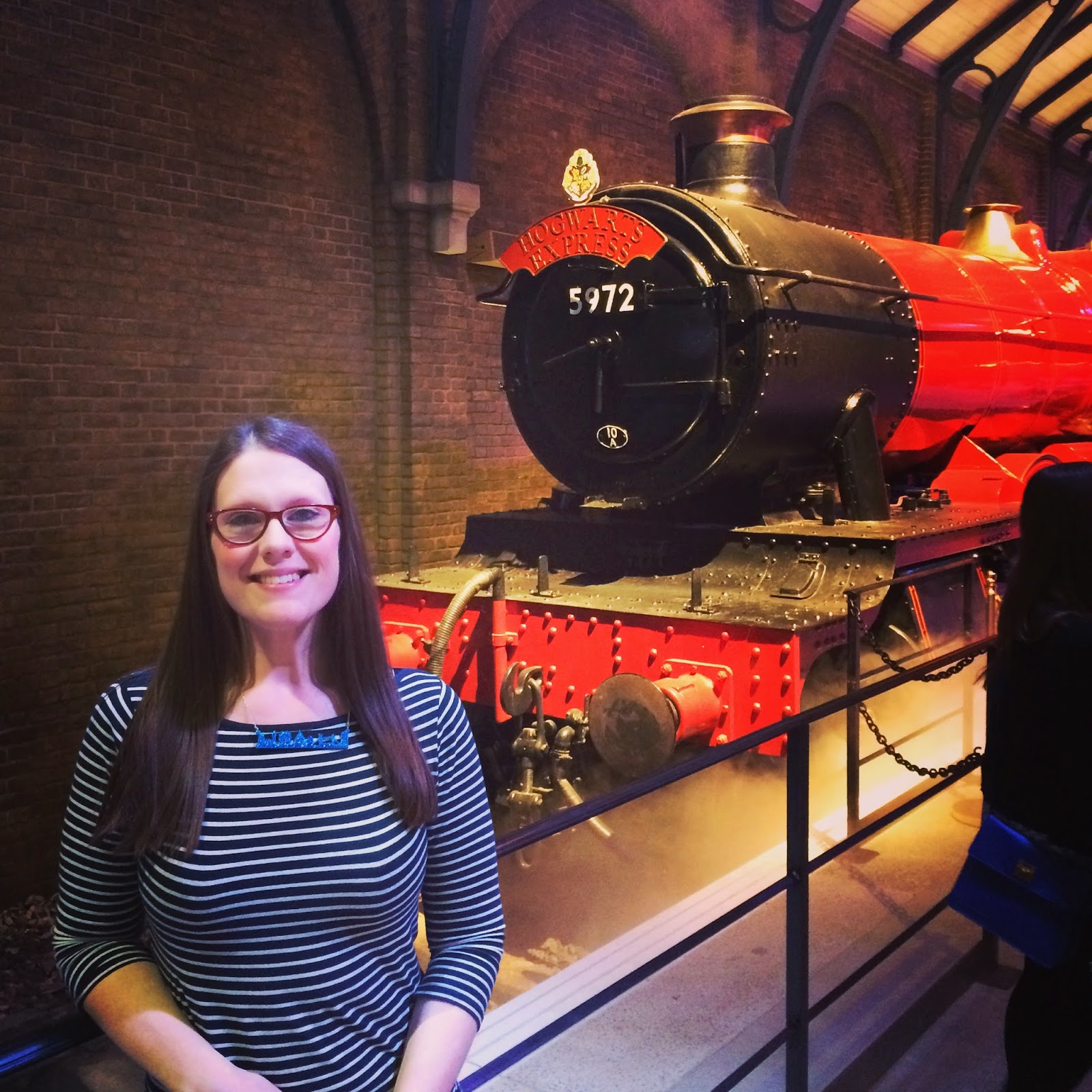 It felt amazing to see her steam and hear her chug! What a beautiful train.

They have a very fun photo opportunity in the form of luggage trollies disappearing into the walls on the station floor! Any Potter fan will know that any witch or wizard heading to Hogwarts will find the top-secret Platform 9¾ by running at a certain spot of wall in Kings Cross station and zooming right through the brick wall to the other side, where the Hogwart's Express awaits them. Here I am posing, secretly hoping I'll whizz though the wall, and actually be able to go to Hogwarts (that's a totally normal fantasy, right?). 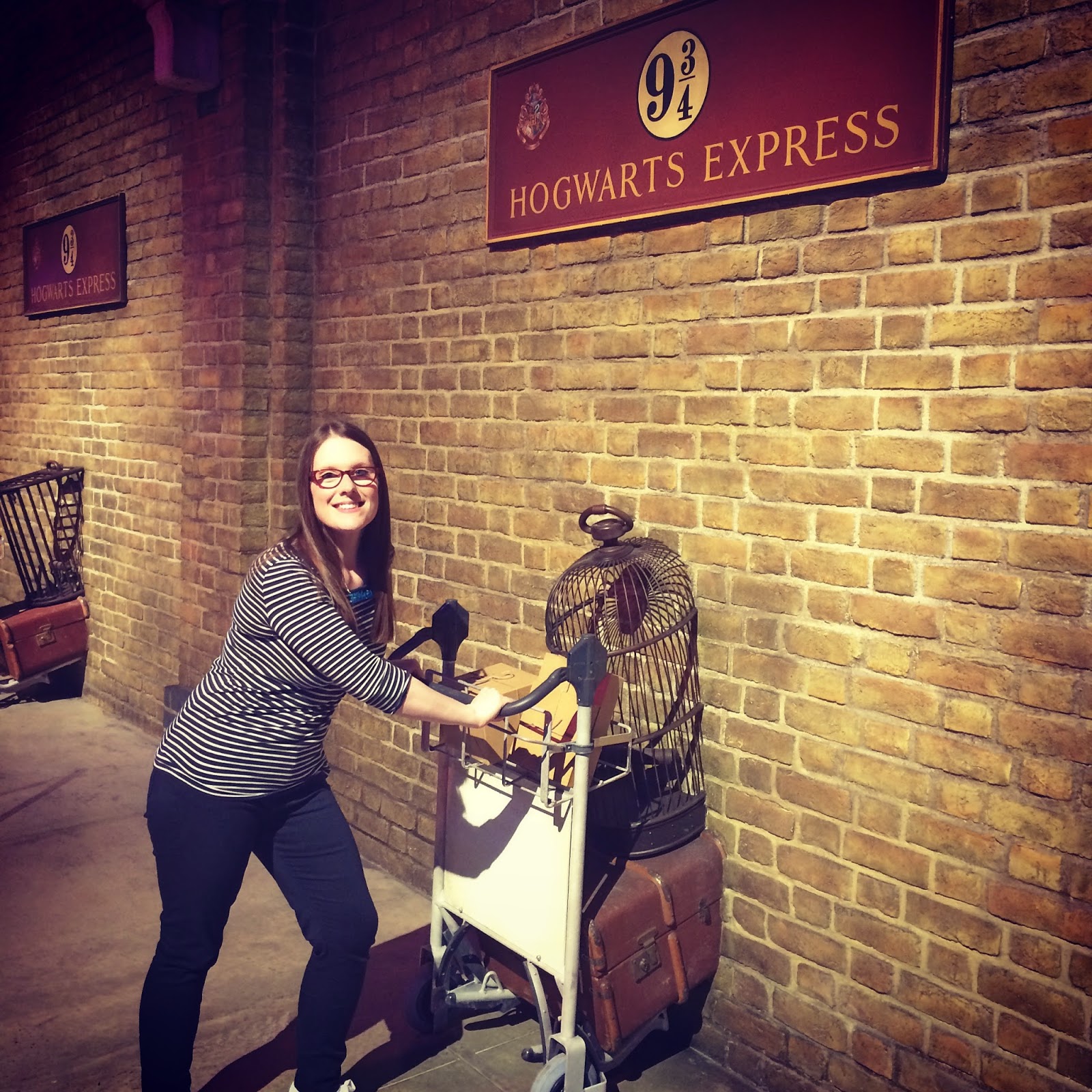 On my way to Hogwarts...

As I moved around the tour I felt so immensely proud of my auntie's work and I was quite overwhelmed by emotion when I saw Amanda's make up table and stand - just as I remembered it... 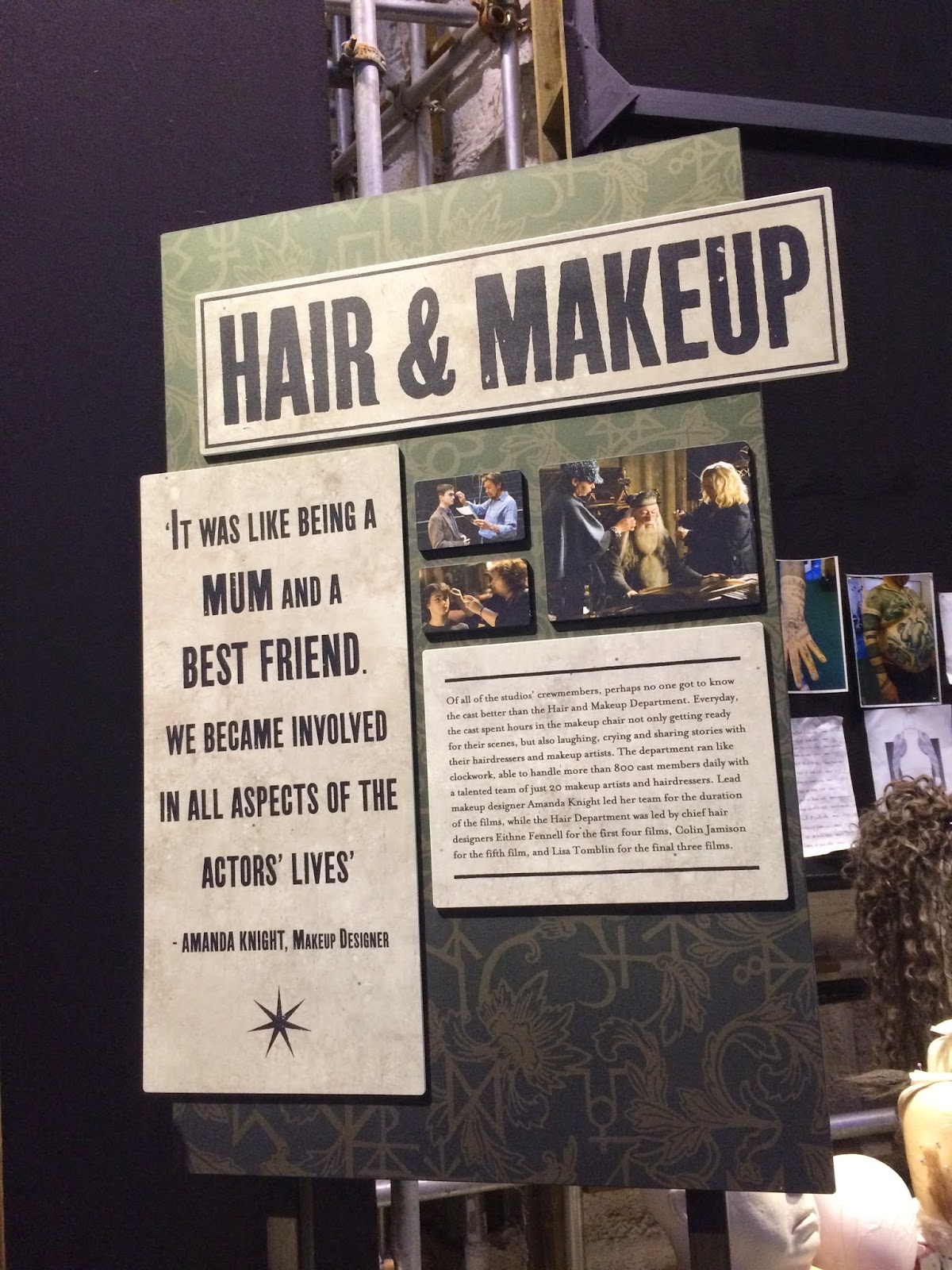 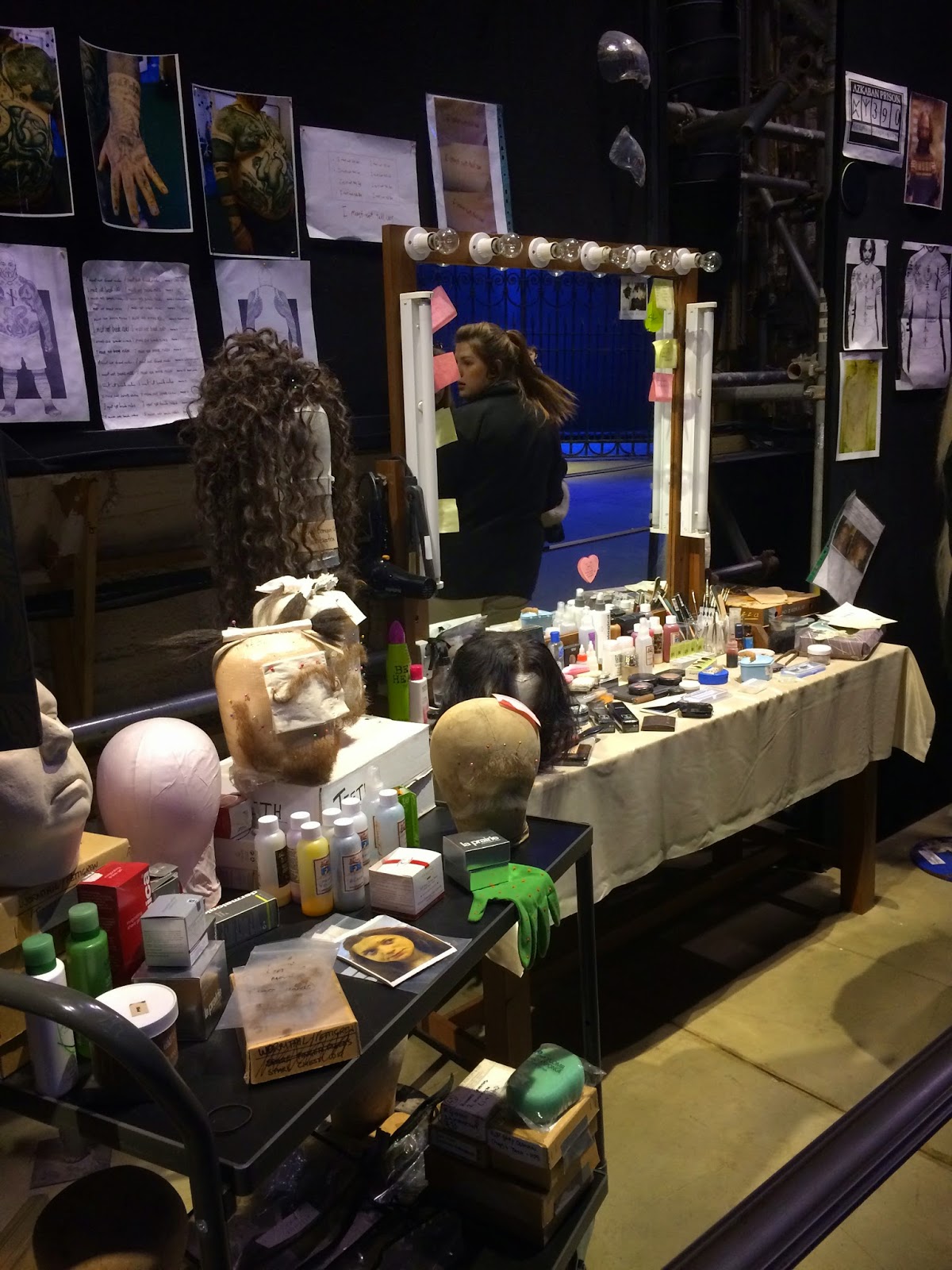 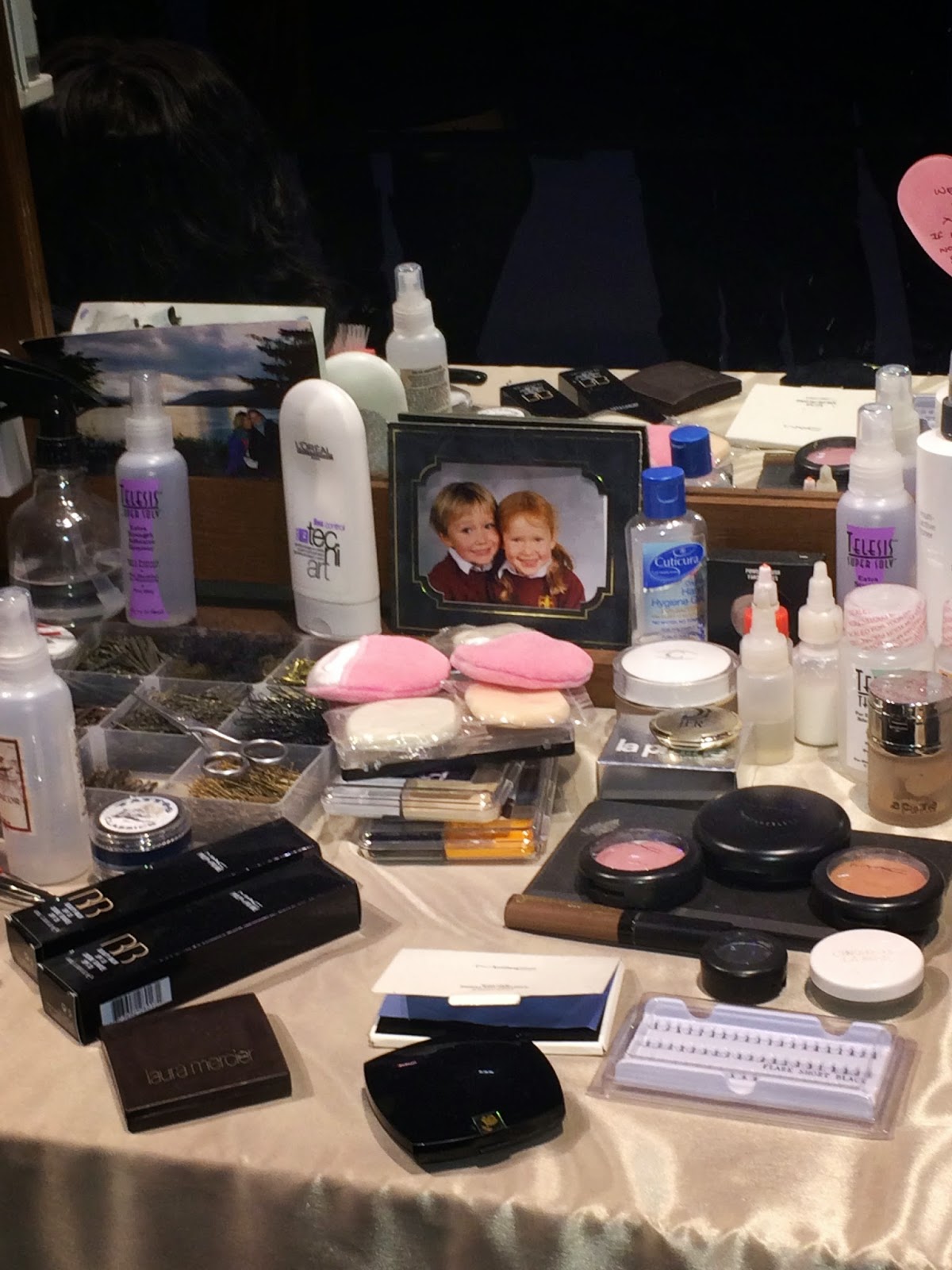 I just loved seeing the photograph of my two cousins, Billy and Bonny (Amanda's children) sat on the back of her make up table. I'm really close to my lovely cousins, and they seem so grown up now compared to this photo - how the time flies!

My favourite character from the world of Harry Potter has to be Ron Weasley - I've always loved him from the very first time I read The Philosopher's Stone aged about 13. So it was really cool for me to see his dormitory room, with his luggage trunk, dressing gown, slippers and a very 'homemade' patchwork knitted blanket. Sweet. 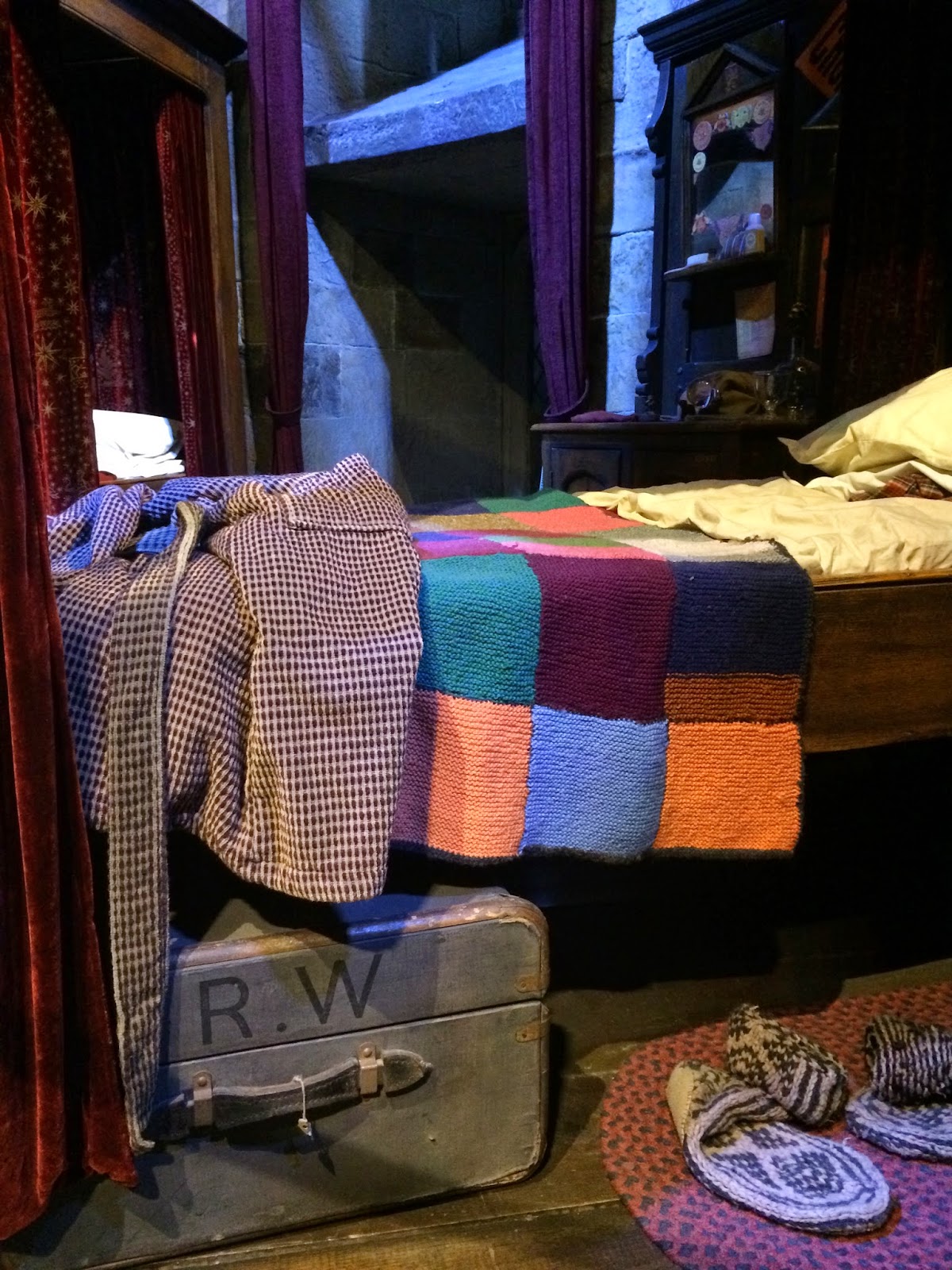 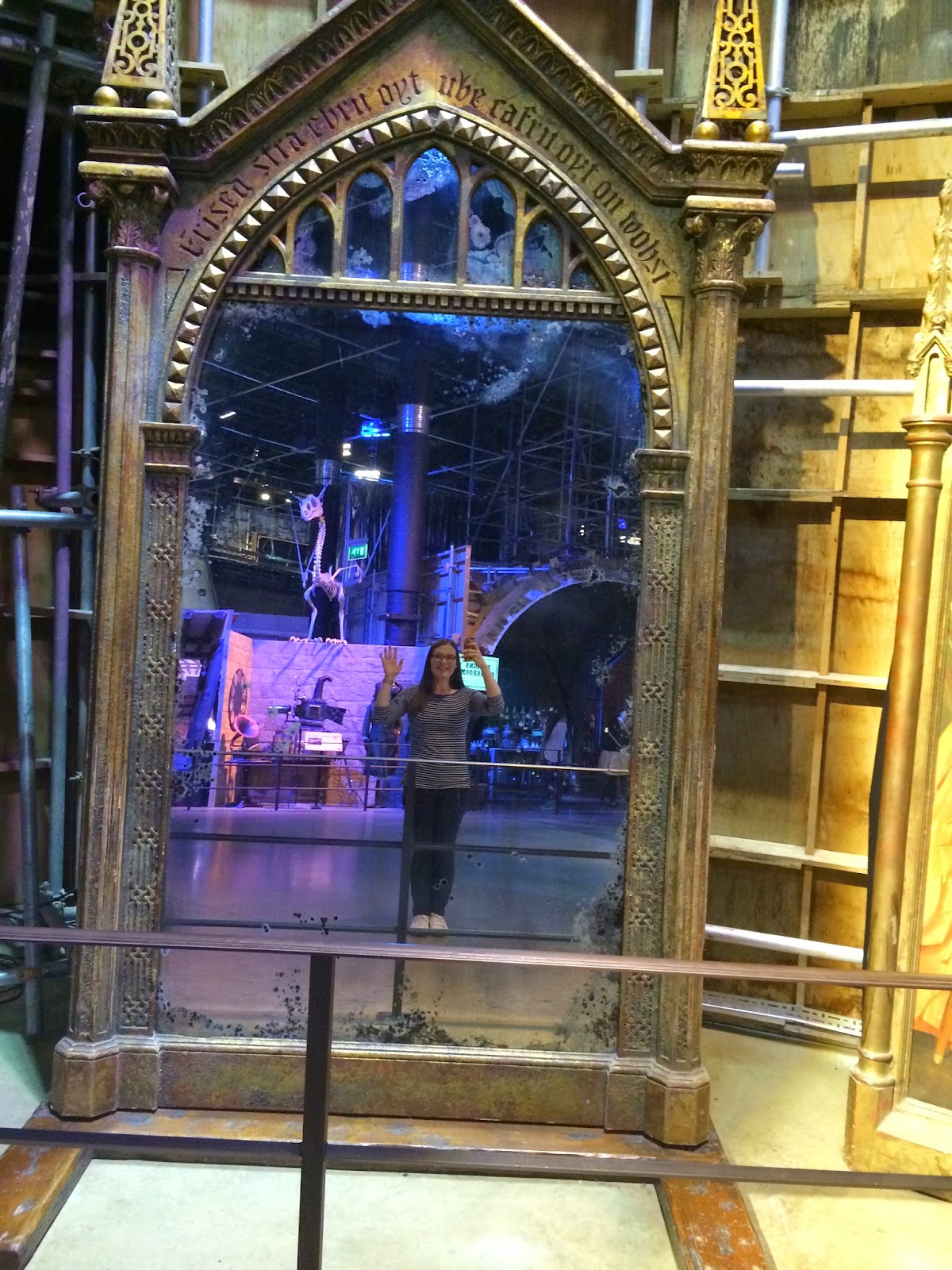 Saying hello at my reflection in the Mirror of Erised (I won't tell you what I could actually see!) 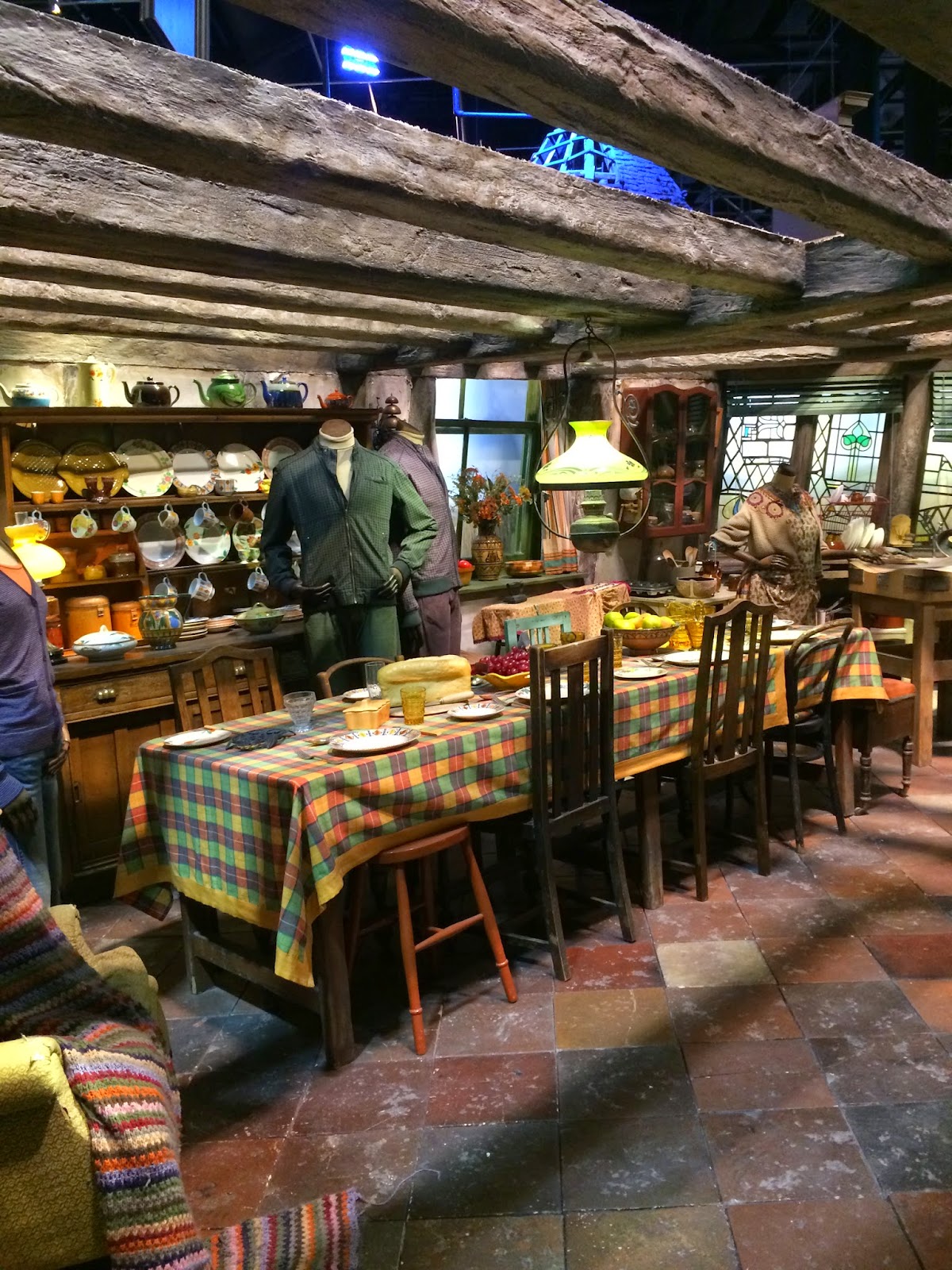 The Burrow: How I'd love to live in The Weasley cottage! 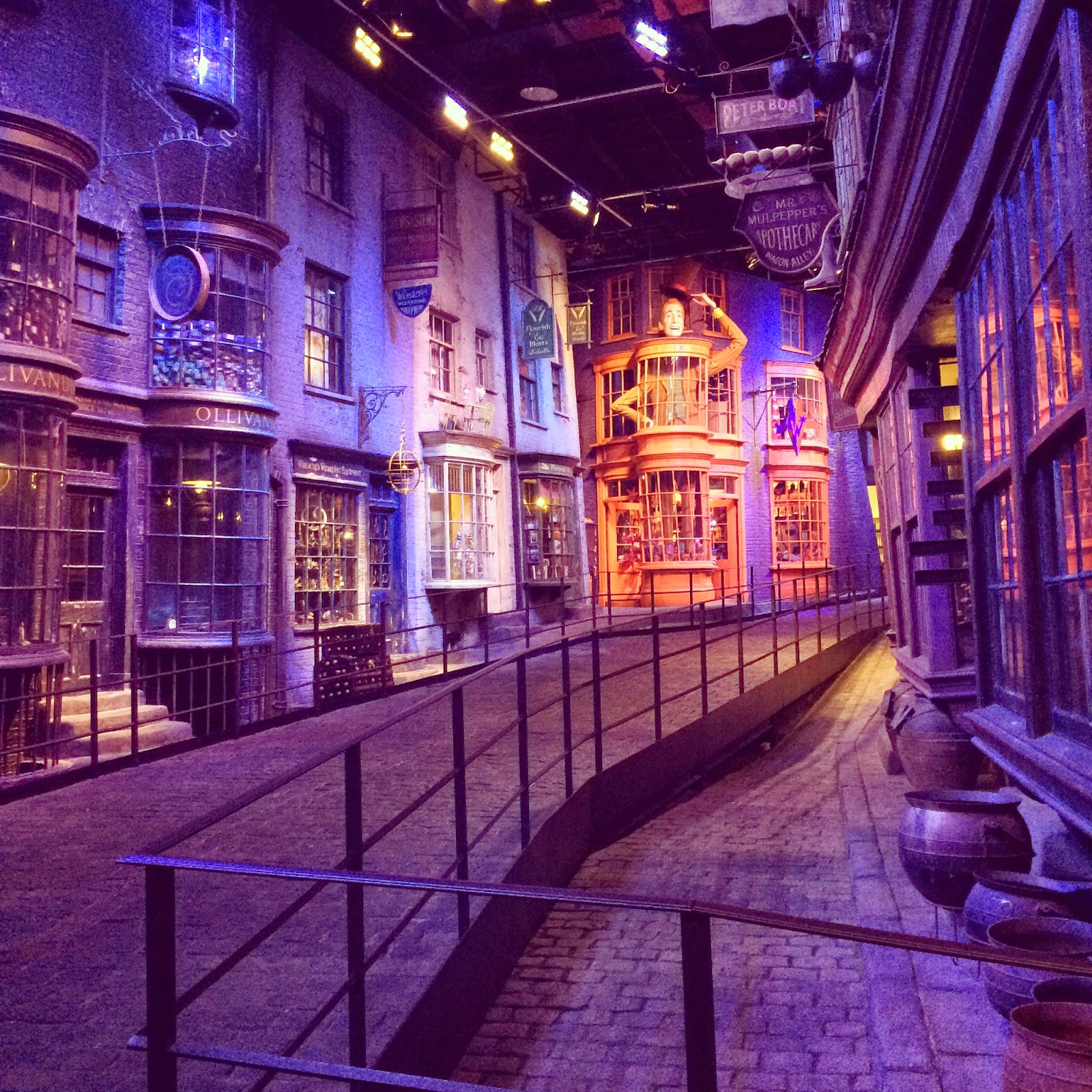 The rather astounding Diagon Alley!

I absolutely loved being able to walk down the real Diagon Alley - it felt so realistic, and the detail into this set absolutely astounded me - it was truly remarkable to see how much work went into making such an amazing piece of set - I truly felt as if Harry, Ron and Hermione would turn the corner any minute and say 'hi!". 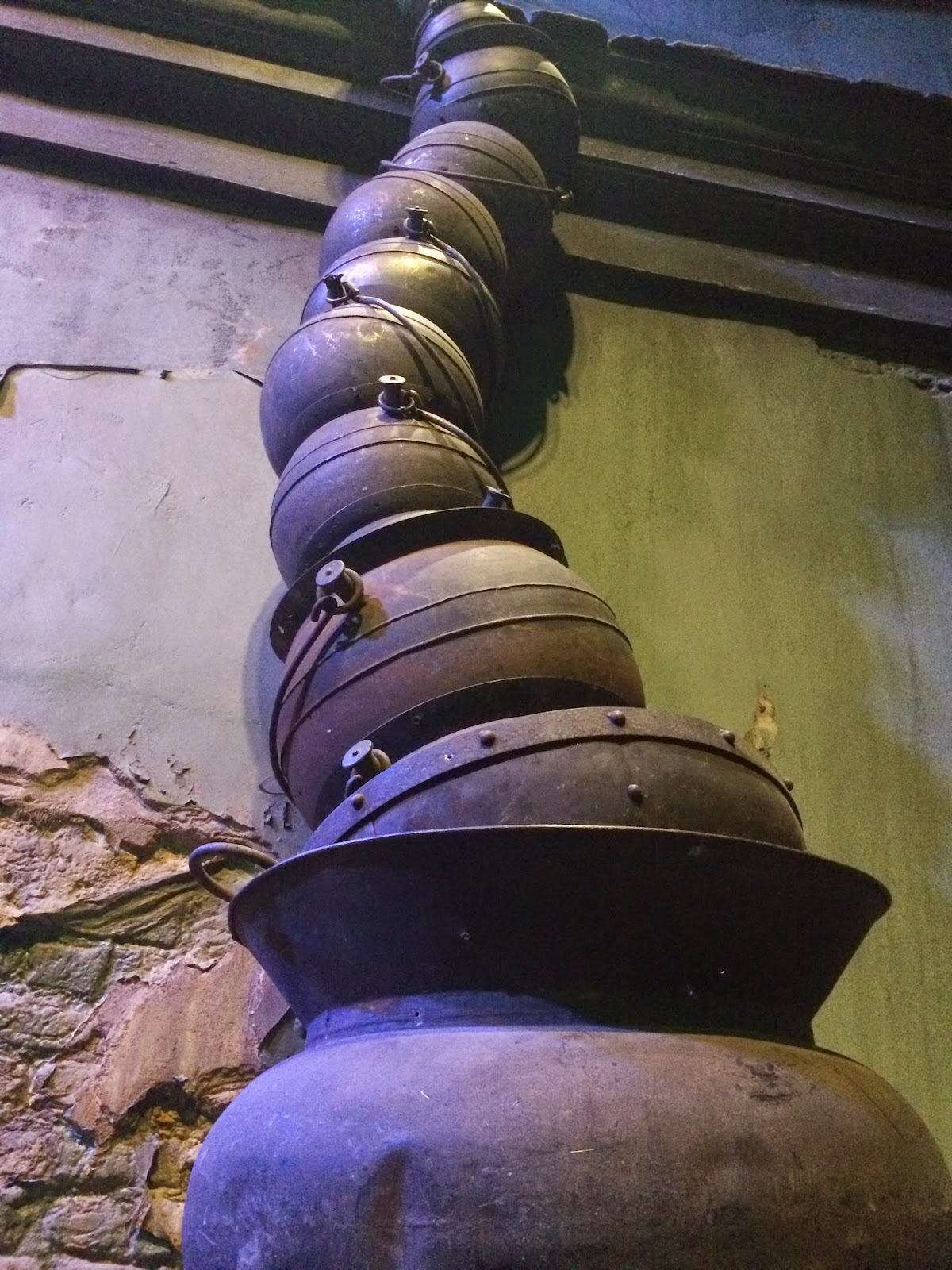 A rather precarious looking pile of cauldrons on Diagon Alley.

After all that excitement and emotion I didn't think things could get much better until I turned the final corner, and was confronted with the most stunning scale model of Hogwarts...it truly blew my mind. 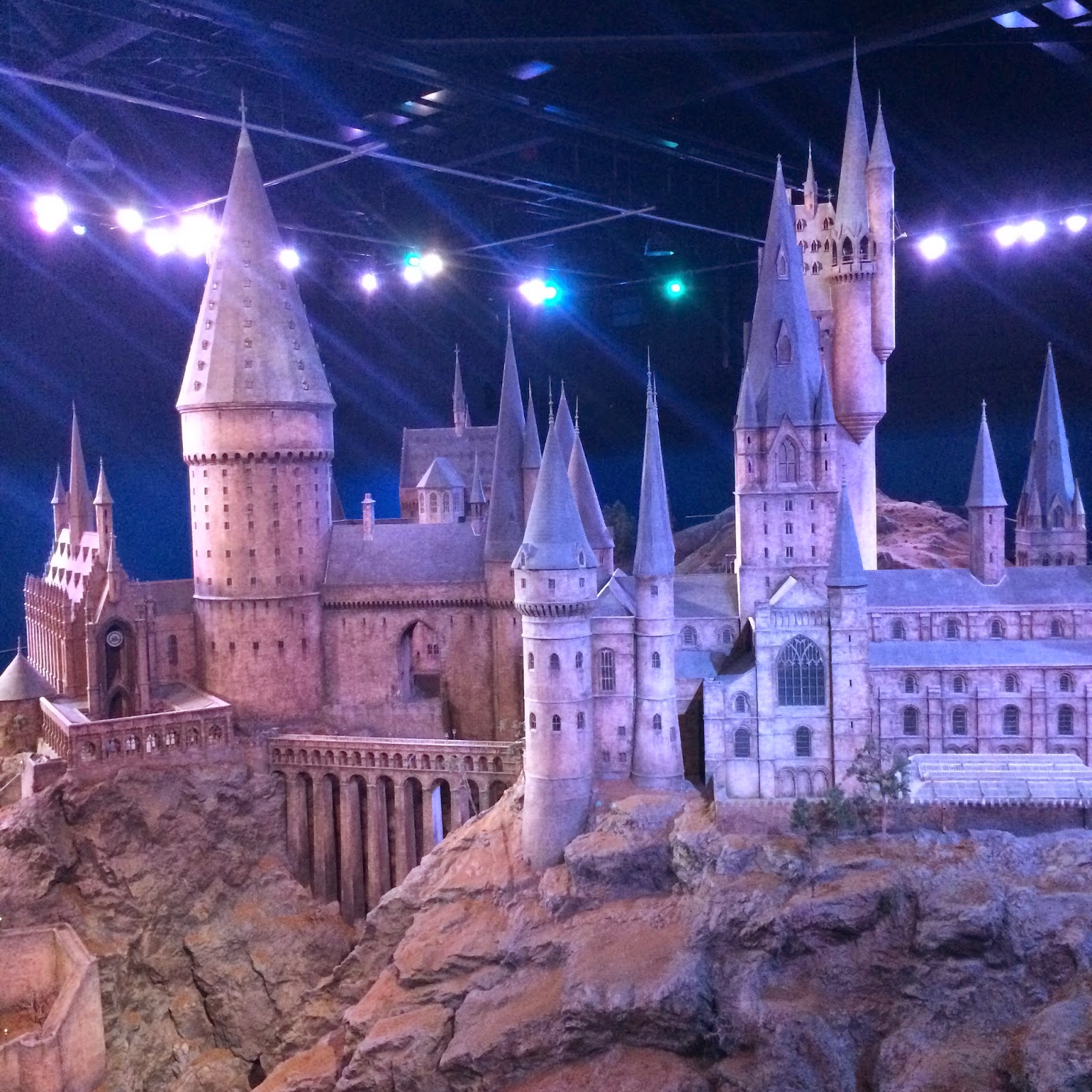 Hogwarts, I love you.

After a rather emotional goodbye to Hogwarts we headed into the INCREDIBLE shop, where I genuinely could have spent a thousand pounds in twenty minutes! If you have a child who is a Harry Potter fan then this shop would be like heaven to them, especially if they have a pocketful of birthday/christmas spending money. I'm saving up to treat myself to some goodies next time we visit. 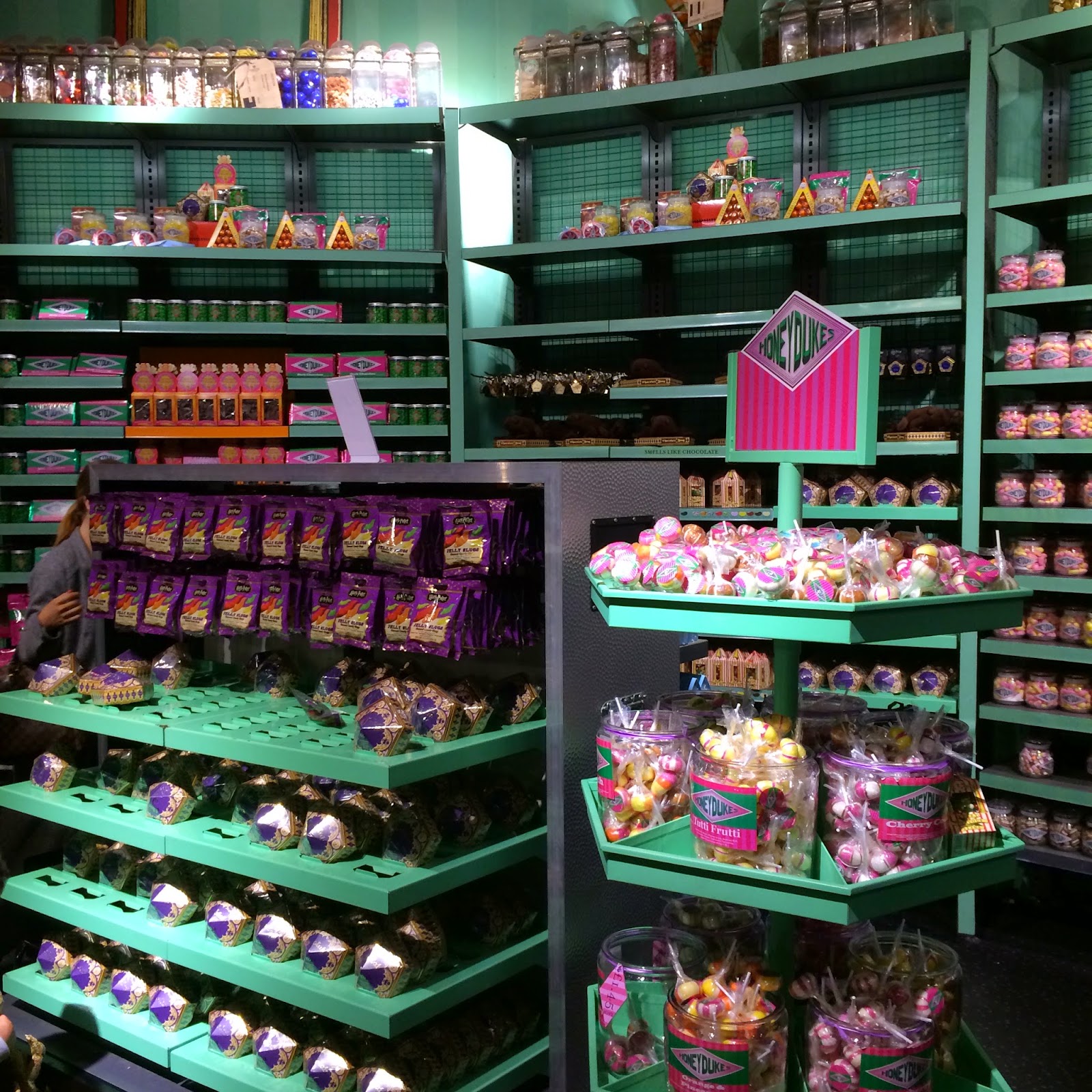 They even have a real life Honeydukes sweet shop as part of the main WB Tour shop: Chocolate Frog anyone? 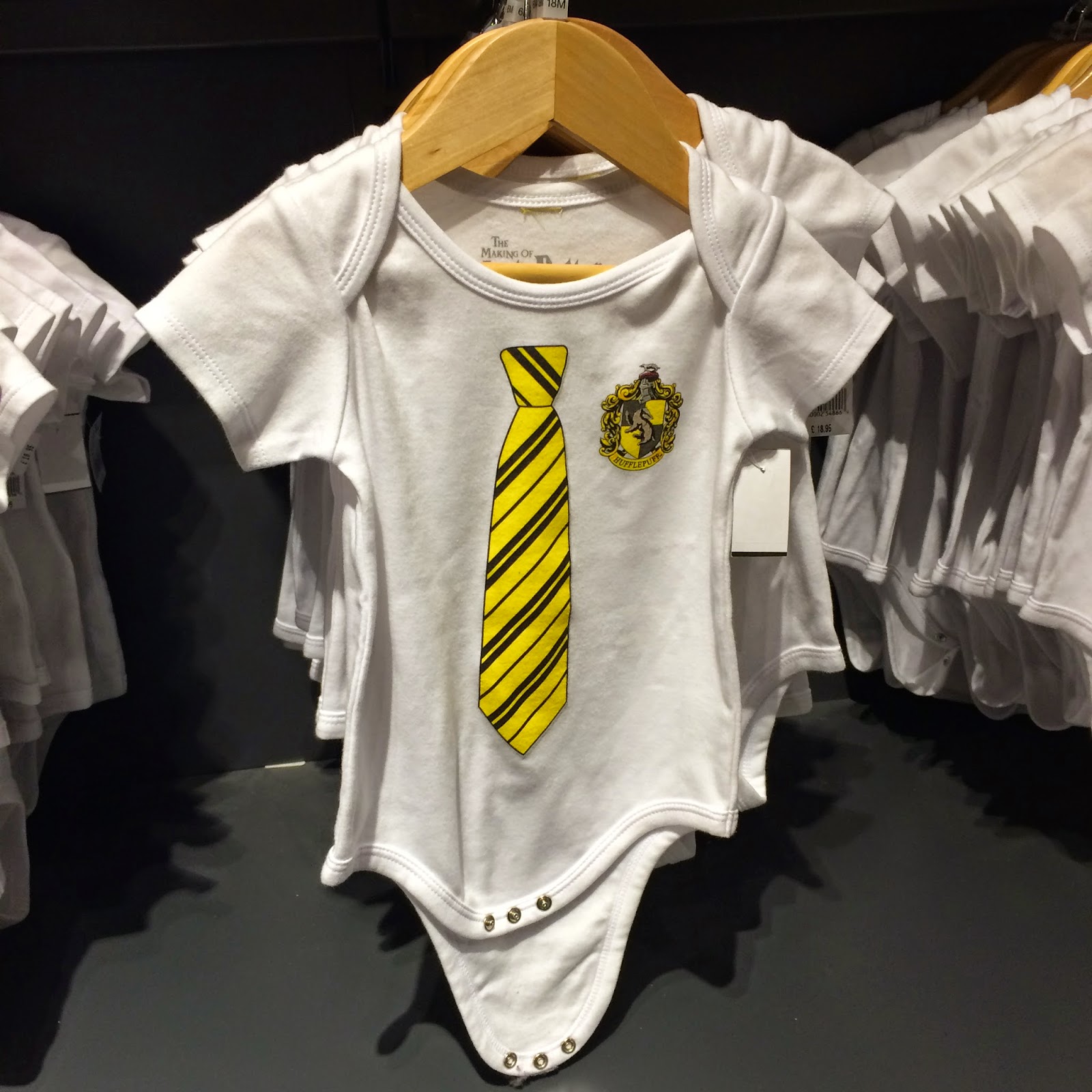 How I resisted buying this for Bert I'll never know!

For anyone who is thinking about going, if you are even remotely interested in the world of Harry Potter, or just in film making in general, you will really enjoy a day out here - I was agog at just how much you could learn about film making, and how much there was to see and do: we have a family ticket which was gifted to us at Christmas from a family member that we haven't gotten round to using yet, and we can't wait to head back this summer for the day! 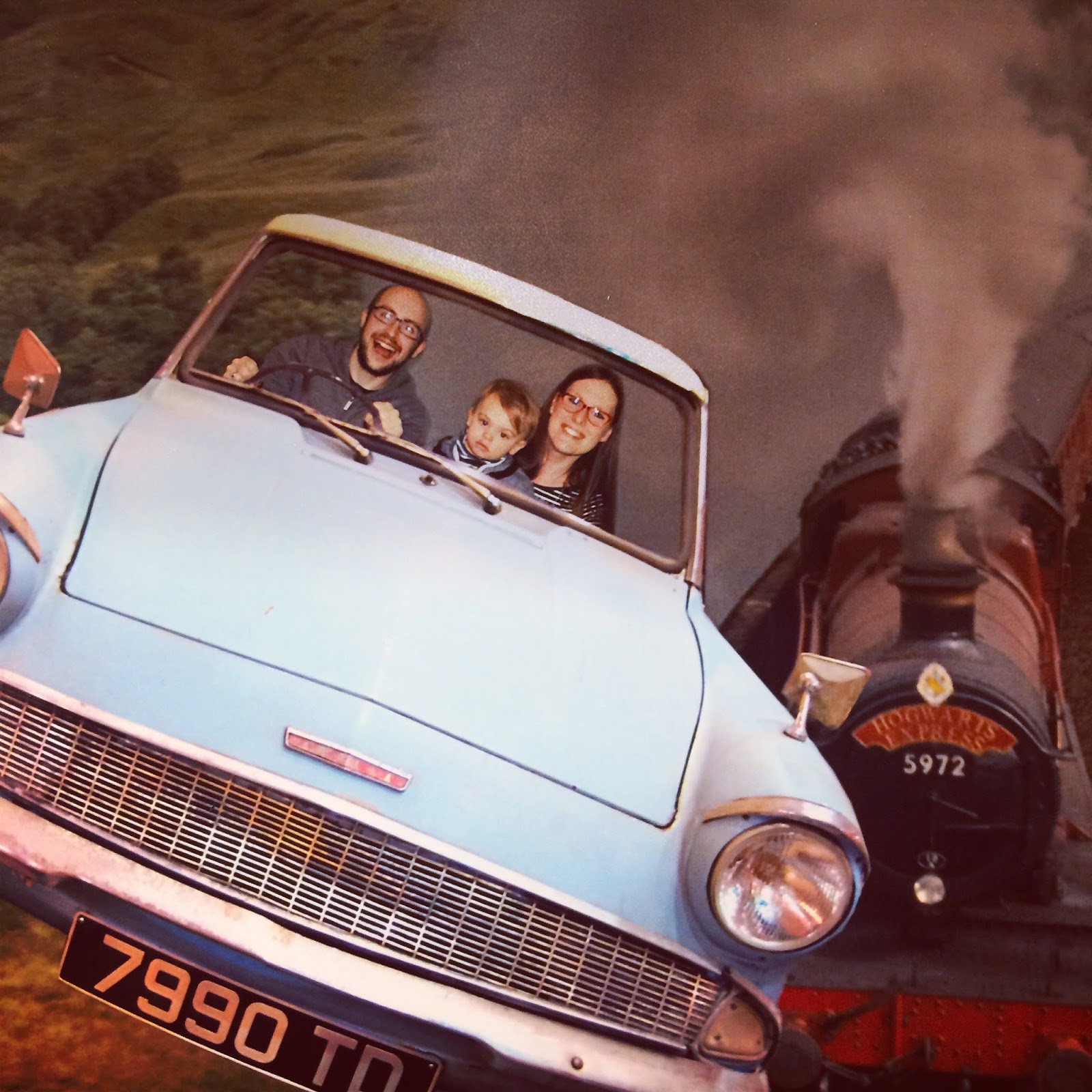 We couldn't resist a family shot in the green screens: Daddy, Bert and Mummy in the iconic Ford Anglia!

You can purchase tickets for the Making of Harry Potter Studio Tour online here.

For more information and regular updates of expansions head over to the Warner Bros Studio Tour Website.

Disclaimer: We were given a family press pass to the opening night of the Hogwarts Express expansion free of charge. All images, words and opinions are my own.