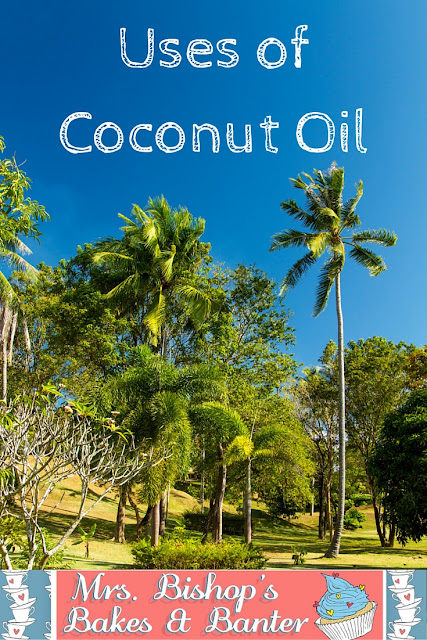 Coconut Oil is all-the-rage at the moment. It's fashionable and trendy - it seems that everyone is using it, but what you may ask can you actually use it for?

It really is a wonder oil and it has so many varied uses from cooking to beauty.

I use my supply mainly for cooking  - it is such a healthy oil, it melts beautifully, and most importantly it tastes fantastic: mildly coconutty in flavour, but not too intense or overpowering at all - I use it in both sweet and savoury dishes alike.

It is an extremely heat-stable oil, meaning that unlike unsaturated fatty acids such as vegetable or olive oil, it does not become damaged by heat. This makes it perfect for baking, frying and roasting. You can also use it as an alternative to butter/spread, add it to smoothies, or use it melted to drizzle over salads etc.

Why is coconut oil so good for us then?


I use coconut oil in place of vegetable/olive oil now in almost all of my cooking, and do you know what - my husband hasn't even noticed, which goes to show how mild its flavour is.

It comes in at around 130 calories per tablespoon, so matches most oils in terms of its calorie content.

What else can I use it for?

Coconut oil is also an incredibly effective moisturiser - you can use it to replace a face cream/night cream (best popped on at night so it has time to soak in), it can be used to make a fresh mojito body scrub, you can use it as a hand cream, and did you know you can even use coconut oil to clean your teeth?

The process called oil pulling uses coconut oil to deep clean teeth by swirling a tablespoon of room temperature oil in your mouth for 20 minutes. It sounds really disgusting and I wasn't sure at first, but actually, it is not unpleasant at all. The oil melts within seconds of being in your mouth, and then its just as case of swishing around the smooth coconutty liquid for the allotted time and then spitting it out into the bin.

It is not a procedure that is intended to replace your current oral health regime (you should still brush with toothpaste, floss and mouthwash), but it is a fantastic supplemental therapy though - here's what the dentists have to say...

"As the oil hits your teeth and gums, microbes are picked up as though they are being drawn to a powerful magnet. Bacteria hiding under crevices in the gums and in pores and tubules within the teeth are sucked out of their hiding places and held firmly in the solution.

The longer you push and pull the oil through your mouth, the more microbes are pulled free. The oil needs to be swished around long enough for it to turn a milky white, which indicates that the bacteria has been "pulled" off. After roughly 20 minutes the solution is filled with bacteria, viruses and other organisms; at this point, the person spits out the oil and rinses thoroughly with water.
People that “oil pull” state that it has helped whiten their teeth, alleviate halitosis, and even reduce gingivitis. In many cases, people also claim that it helps “prevent” cavities, as well as relieve gum and tooth sensitivity."
(You can read the full article on Oil Pulling here.)
I first heard about oil-pulling from my friend Anwyn about three months ago, and I was really intrigued as it sounded like such an odd process!
I decided to give it ago, and have now been oil pulling 1-3 times per week ever since. My teeth feel much cleaner and stronger and I love the feeling in my mouth after oil pulling, as a bonus it also leaves my breath feeling/smelling lovely and fresh too! I find it really easy to fit into my weekly routine - I just set a twenty minute timer and get on with checking emails or unloading the dishwasher while I do it. I will definitely continue to make oil pulling a regular part of my oral care routine, as well as using it on a daily basis in the kitchen.
Which one shall I buy?
My coconut oil of choice is Monkey Nutrition's Organic Virgin Cold Pressed Coconut Oil, and here's what they have to say... 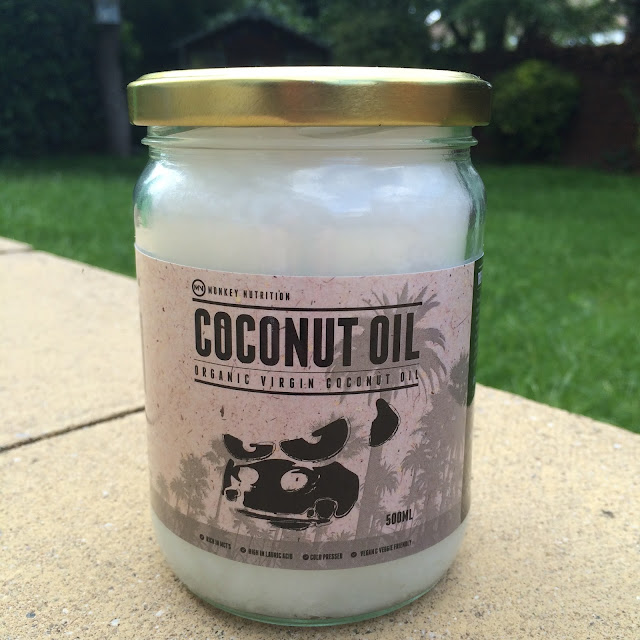 THE HEALTHIEST OIL ON THE PLANET

The list of health benefits that come from using a good quality coconut oil is exhaustive. It is known to protect the human body from a number of chronic illnesses, assist with fat metabolism and has antibacterial properties due to its high lauric acid content.

Made up of medium chain triglycerides (MCT’s), coconut oil is heat stable, making it ideal for cooking.  Healthy oils such as olive oil are fantastic to use when cold, for example on salads. When you heat them at reasonably high temperatures or for prolonged periods, however, the structure of the fats is damaged causing them to oxidise. This can do your body more harm than good.

On the other hand, studies have consistently shown that the MCT’s in coconut oil play an important role in the fight against belly fat.

The sourcing and processing of coconut oil will also determine its quality as Monkey Nutrition founder, Chris Simon, explains: “We had a lot of boxes to tick to ensure that we were bringing the cleanest product possible to the market.

“We found a lot of the oil from nations such as India and Sri Lanka had a slightly smoky flavour that was a concern, so we instead opted for organic coconuts from the Philippines. We’re always hot on the processing causing damage to products too, so we made sure it was cold pressed, virgin, unrefined, which ensures solvents such as hexane aren’t used in the product.

“Finally, we chose a glass jar instead of a plastic tub which avoids the leaching of toxins such as BPA and phthalates.”

Monkey Nutrition’s 100% Organic Virgin Cold Pressed Coconut Oil is available from monkeynutrition.com and is priced at £10.99 for a 500ml jar.

For more info go to www.monkeynutrition.com
Posted by Lucy Bishop at 11:27