Today on the blog I'm bringing you a chance to win a fab little stocking filler for your little ones...a brand new DVD from Abbey Home Media in time for Christmas.

Join Peter Rabbit and his friends on some wonderful Christmas adventures... 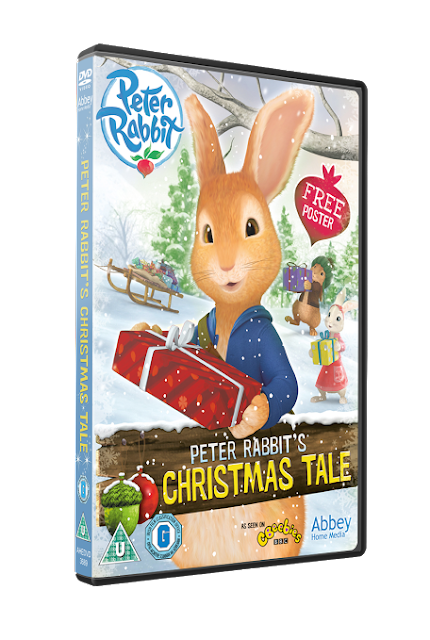 In this enchanting new collection Peter and his loyal companions Benjamin Bunny and Lilly Bobtail embark on fun adventures and wintry escapades.

The DVD features the following collection of eight delightful stories:-

Peter Rabbit’s Christmas Tale - When Mr. Bouncer gets too sick to make the important holiday supply delivery, Peter and Benjamin take it upon themselves to brave a blizzard (and Mr. Tod) to get the job done and meet a new friend along the way.

The Tale of the Uninvited Badger - When Tommy Brock decides he's had enough of the cold, he takes shelter by the fire inside the Bouncer's Burrow. It's up to Peter and his friends to devise a way of getting the grumpy badger out and to make sure he doesn't come back!

The Tale of the Runaway Rabbit - Peter is left to babysit Cotton-tail but can't resist an exciting event at the Squirrel camp. He brings his sleeping sister along but soon must rescue her when she wakes up and crawls away

The Tale of the Stolen Firewood - When Peter, Lily and Benjamin go out to collect firewood, they soon find that not one but three predators are after some too. Can the rabbits stage a series of daring raids to retrieve it?

The Tale of the Grumpy Owl - When Old Brown takes Peter's Journal, Peter must choose between saving his most precious possession and saving a friend.

The Tale of the Lucky Four-Leaf Clover - When Benjamin finds a four-leaf clover, Peter tricks him into thinking it brings good luck. It's harmless fun until Peter's prank accidentally leads Lily into Mr. Tod's dangerous clutches!

The Tale of the Big Move - When Lily's father decides to move the family out of the Lake District, Peter comes up with a clever, but dangerous, plan to change Dr. Bobtail's mind.

The Tale of the Greedy Fox - When Peter tells an impulsive lie, which leads Jemima Puddle-Duck into Mr. Tod's clutches, he must act fast to stop her from becoming the fox's dinner!

Bert absolutely loves Peter "Raddit" (bless him!) and I'm pretty sure your little one will love this cheeky bunny and his escapades too!