A bit of culture with Liz...

Yesterday I had some time off from being Mummy and headed into London for an afternoon/evening of fun and culture with my lovely mate Liz.

We headed into the Notting Hill area where we saw some awesome yarn bombing (see mine and Liz's yarn bombing in Bedford not so long ago here)... 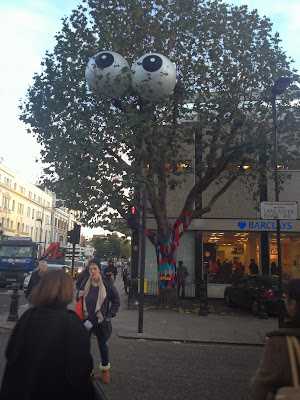 a tree with eyes and a knitted sweater!

Of course, it was only last week I was in the same part of London visiting Biscuiteers for their press-night (read about the press night here) so it seemed only fair that I take Liz there being as she loves sweet things just as much as me!

We had their awesome afternoon tea priced at £35.00 for two people, and blimey it was fab! 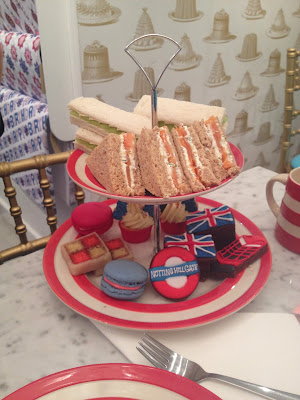 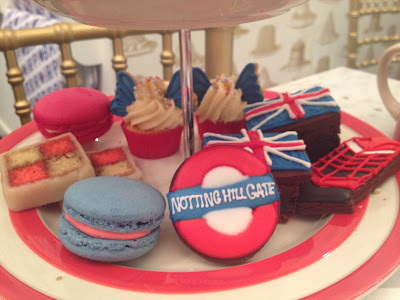 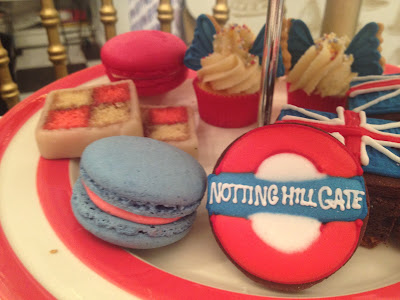 who wouldn't be charmed by these little pretties? 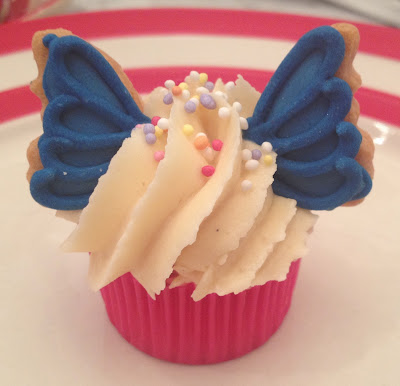 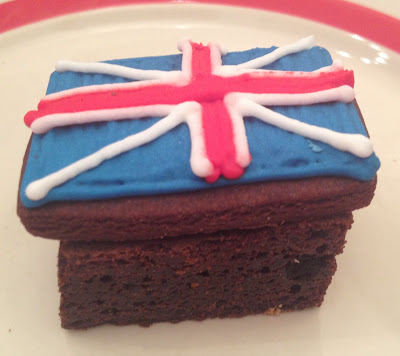 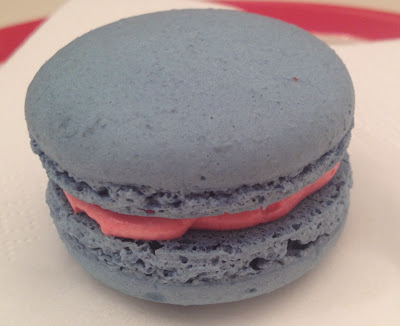 the best macarons I've tasted - full of creamy deliciousness (what DO you put in your macaroons guys? I need that recipe!) 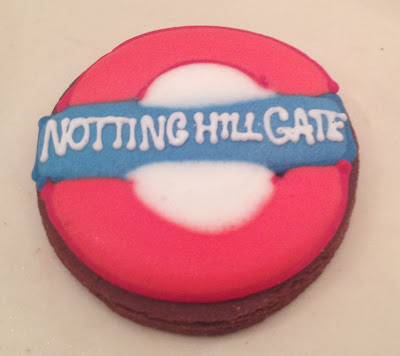 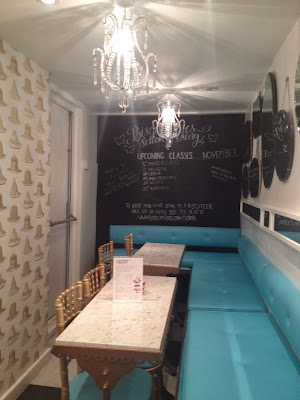 And just look how PRETTY the walls, seats, lights, chairs etc are! 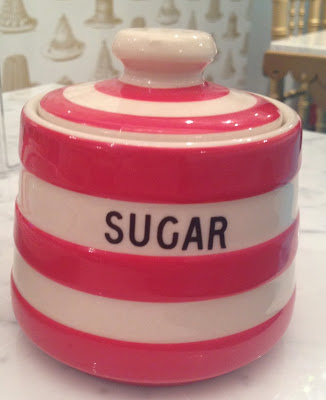 They even use my very favourite china - Cornishware which can be bought here.

After stuffing our faces, drinking enough tea to drown in, and putting the world to rights we headed into Kensington for a bit of culture. We went to the V&A Museum (my favourite of the London museums), and it was cool to go with Liz as she'd not been before and was seeing it all with fresh eyes.

For those of you who don't know, the V&A do late night opening on a Friday where they have a licensed bar, music playing and most of the museum and shop open to explore!

We however had special tickets to an art lecture (get us!) by the AMAZE-BALLS Mr Rob Ryan, who is one of my very favourite artists ever (see my recent gushing about his awesome paper-cuts, and new jewellery line here) 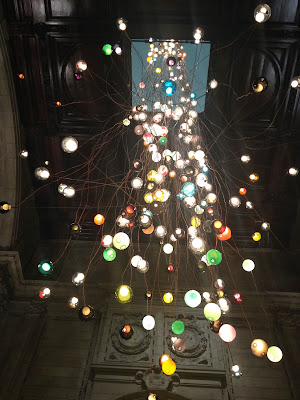 the entrance to the V&A, stunning! 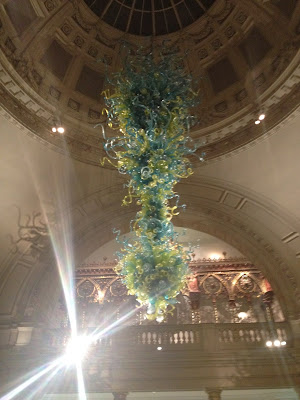 what a feature! the reception at the V&A 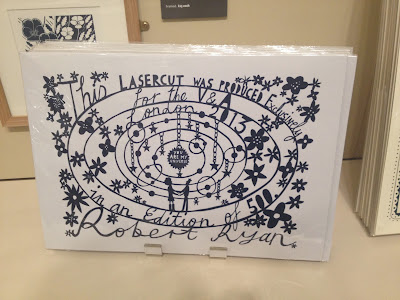 Rob Ryan's lasercut for the V&A 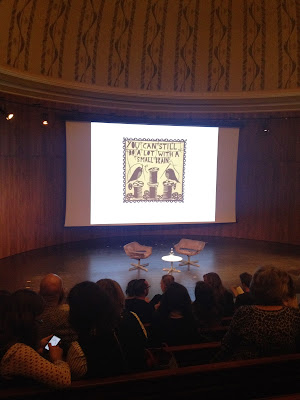 In the lecture theatre waiting for Mr Rob...

Rob was uber-cool. He was chilled out and down to earth. Refreshing to see when someone is as famous and well-regarded as he is.

He talked honestly and frankly about his career, his education and upbringing, and what inspires his work. He showed slides of the paper-cutting process, his kiln, workshop, and assistants hard at work - it was great to see 'behind the scenes' so to speak, and humbling to hear how hard he worked to get to where he has today.

Rob was relatively 'unknown' for the first 15 years of his career (after leaving art school) but worked hard in a shared workshop space doing what he loved and working evenings and weekends to fund his arty lifestyle - boy did that pay off! He has now well and truly exploded onto the art-scene, and is becoming quite a household name -things especially took off for him about 5 years ago when he opened his shop Ryan Town on Columbia Road, and began producing pieces for commercial projects (editorials, book covers etc).

He interestingly shared with us his reason for not just selling his one off paper-cuts but producing affordable products made on-mass with his stunning paper cuts emblazoned across them (available here at John Lewis). He explained how a few years ago there was a craze of people copying his work, ripping off his images, and taking credit for them - he felt he had to do something to re-claim his work as his own, and decided that arranging for his work to be printed onto affordable ceramics, fabrics, cards etc and sold on a large scale was the answer. He was right. The ranges are so popular now that there's no denying whose name the work belongs to.

He's a clever poppet, understanding that art can have many forms, and be appreciated even on a mug or a book bag! I genuinely love my pretty Rob Ryan ceramics, and am so happy that I can have a piece of his marvellousness prettying-up my home without paying the £1000+ price tag for an original paper cut.

If I win the lottery it would be one of the first things I'd buy - a huge black and white romantic paper cut to sit above my bed...just like this one.... 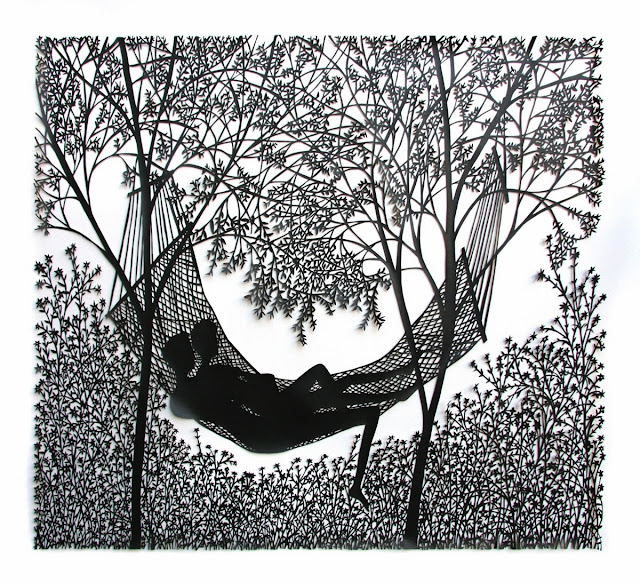 Rob's art uses mainly whimsical figures and romantic narratives, but also incorporates grave, honest and occasionally humous writing too. He regularly uses the image of a small bird in and among his paper cuts - and anyone who knows me will know I have a bit of a thing for birds...I even have a tiny little Tweetie tattooed on my wrist... 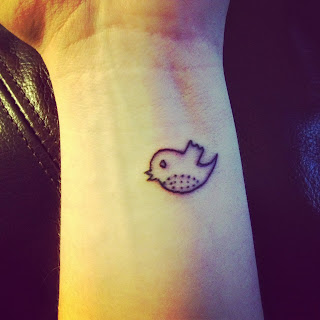 So its no wonder I love his work so much, and I'm so pleased we took the time to go along and meet the man himself.

A totally fun and inspiring day with my lovely mate! 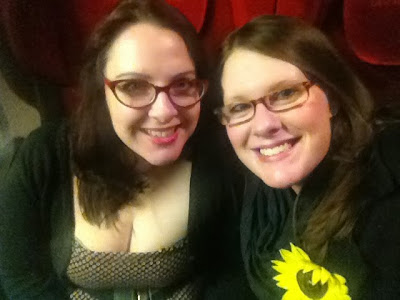 Me and My bestest girlie on the way home after our London adventure!

I wonder what our next adventure will be?